Minolta produced a lot of lenses in the life period of SR-mount (manual SLR lenses) and as many other companies didn’t care about a clear classification. For example – there were existed about fifteen lenses 28/2.8: one Auto Rokkor, five MC Rokkors, maybe one MC Celtic, seven MD Rokkor, and two MD. Most of these lenses are not the same by IQ and characteristics. Any owner has enough big chance to make a mistake with the determination of what exactly is the lens. And it’s OK. Not many people in the whole world are able to sort out with any Minolta SR lens (less than ten?).

The famous Minolta SR-mount Lens Index created by Dennis Lohmann on his site minolta.eazypix.de is the most popular source for photographers and collectors. Finally, it becomes the source of conventional lens indexing. The site contains some gaps in indexing which can be easily fixed but it looks that Dennis stopped to update the site. Anyway, Dennis’s classification system became standard. Yes, it isn’t ideal but just because it is impossible to be ideal in such a complicated task. Anyway, it was published the first among others. And if to remember that other systems also aren’t ideal, then the reason for the popularity of this system is clear.

Based on minolta.eazypix.de site data, this diagram was created as a tool to provide the easiest way to determine a type of any SR-mount lens.

For today it has version 1.0 and it means that the logic of diagram and list of exclusions can be updated if necessary. Your comments and objections are welcome.

It’s simple: just start from the orange point in the center of the diagram. 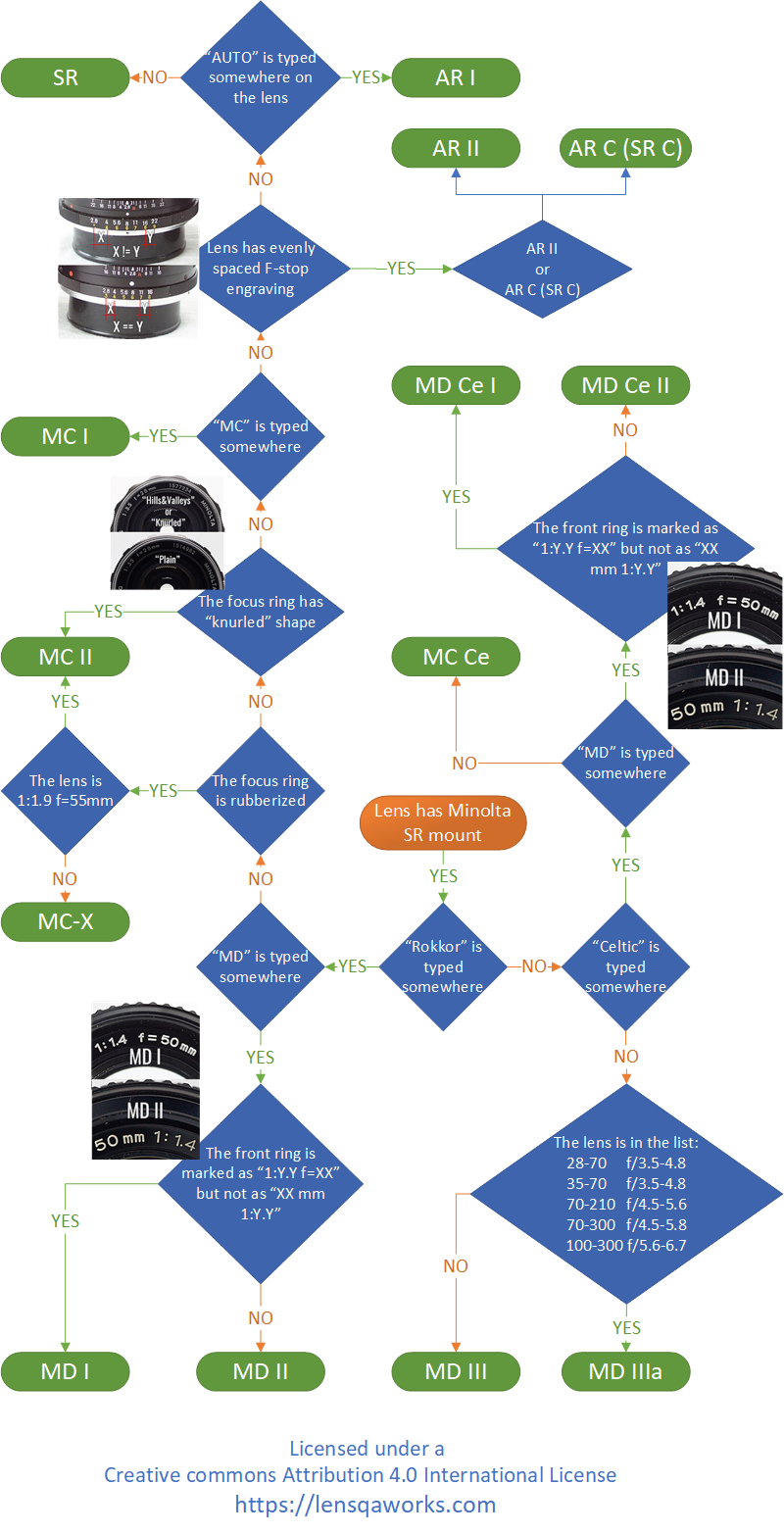 #1 – out of diagram: Known exceptions or lenses which are impossible to clearly put into diagram logic:

#2 – can’t be clearly defined by diagram: The definition of AR C (AR Compact) is difficult to describe in terms of logic alone because in some cases it is necessary to make comparisons with previous AR II models.

(Anyway: for the AR Compact edition the front ring went black, showing the transition to screw-in lens shades. Likewise the marks for F-stop and distance – so far a dot and a triangle – were combined to a diamond-shaped index. Also, the stop-down lever was swapped against a tiny disc, like a pusher. And following the meaning of a compact series, dimensions and weight were reduced.)

And more about “Compact” series by Maury Jacks (original link):
“…. Unless the design of the lens has changed, the lens is still an AR-II or SR even though “LENS MADE IN JAPAN” has been added to the front ring. That would make the 35/4 with 52mm filter thread the only SR-C lens.

Here are the SR lenses I have seen with “LENS MADE IN JAPAN” moved to the front ring.

Here are the SR lenses I have NOT seen with “LENS MADE IN JAPAN” moved to the front ring.

Here are the SR lenses introduced after “LMIJ” was added to the front ring.

BTW: not collector’s but very useful definitions for Minolta manual SLR lenses (some of…):

As it said above – this is the most popular but not only one classification of Minolta SLR manual lenses. It stays somewhere in the middle among others. Collectors are using this one with additional descriptions on the deeper level. It seems like a few different classifications simultaneously. But original Minolta classification by trade-marks can be considered the main since it is used by millions. This is at the highest level.

Here is a lot of quotations of some Minolta collectors, it may help to realize how the question about classification is complicated and deep. I prefer to don’t correct or cut anything – this information should be saved as-is:

My data model started from a series of codes used by Minolta in the Code Number List booklet which then refer to the Annuals.

These are official codes Minolta. Unfortunately they aren’t precise enough for our purposes and I also made changes to them. Downgrading the concept of Rokkor-X from a main role to a secondary role.
Note the confusion about “N-MD” and a simply “N” used in Minolta, really a poor classification in the original.

This thing we then reviewed in the AF period with the introduction of the RS series also called NEW with the rubber focusing grip. RS is “Redesign” too.

I have my own system that I designed and it’s still different. I don’t ask for my system to be adopted as I don’t want to adopt another’s. I confess that I would never have designed Dennis’s model as he did, personally I have never been comfortable with that and I have talked about it with him several times. At the time it was hoped to be able to do a joint job but the distances and personal commitments never allowed it.

What is public and is Dennis’ site is crystallized, only he can access and manage it. We don’t know where he is and we don’t know if he will still pay the costs of keeping the site active. In theory, it could also disappear tomorrow.
Until others replace him, this is the only public reference and we cannot change anything. I have been saying for some time that this model should be overcome, if nothing else to correct some errors identified for some time But I personally don’t want to be the main actor now.
I can’t say anything else.

The thing is not simple because every collector has his own method with which he is comfortable and certainly doesn’t want to change it.
Then one thing is the file that is managed (in my case in Excel) on the owned computer and is updated personally when needed and a very different thing is a website that must be built with the aim of distributing information. For this you need different capacities than updating an Excel file. Then you need to do the maintenance, update the contents, pay the costs, etc.
First there must be someone who takes this assignment and wants to do it, the data model in the end is a detail. For example I use a lot of the automatic filters of Excel, they are part of the management and my data model is based on those, the coding with the abbreviations isn’t important for me. But coding an object is important for communicating externally what class this object is in. In my data model this isn’t necessary and isn’t present, my encoding remains at a high level and for example I ignore all the specific encoding to distinguish Rokkor and Rokkor-X, I use another method to separate and identify them. A website isn’t the same thing. There must be an expert who chooses the best solution to avoid complications for users. What matters is that it is easy to find the information and that the data can be updated if needed.

I can also participate in the costs for my part, although I have always worked in IT, but my job has never been about creating and managing websites.

Last but not least, the most interesting part of this system is how to record the serial numbers found. It is clear that if on my file to add one of them, just an open, add and save is need. On a website, do you want to put them? How much does the effort to do it cost? Who updates them? Who controls them? How often do they update? Should the name of the person who found it be made public? You have to say where did you find it? Must there be links to pictures to check this?
I confess that without serial numbers this thing loses much of its practical usefulness. Some classes only differentiate for a different initial serial while being identical to each other. Only with serials we can they determine the quantity and rarity of a certain class of lenses. Think how to identify all the many types of 35mm f/2.8 or 135mm f/2.8, without the serial numbers it seems impossible.
And then let’s tell the whole truth, collectors have spent years collecting them and are also jealous of their work and it certainly cannot be blamed.

When i am out of the house and see some lenses i want to take a note of, i use the following system (note i don’t use capitals to distinguish this from Dennis’s original system):
– mc3: original MC-X lens with paint dot lens mount index (there are no lenses of this type that bear the orange ROKKOR-X marking at the front so there is only mc3 after you see the codings below)
– mc4: later model with bead, mc4X for orange ROKKOR-X with bead
– mc5 for later variations without the SDOL (DOF lever or button), mc5X when with orange ROKKOR-X
– mc6 for models with no SDL and no lens formula suffix, mc6X when with orange ROKKOR-X
– mc7 for models that changed through the MC-X era and were never available with SDL or lens suffix, mc7x for those with orange ROKKOR-X These usually have very different serial numbers from their original versions
-md1 for lenses from the initial listing of MD lenses where the front markings are similar to MC-X but without the serial number, again md1x when with orange ROKKOR-X
– md2 for the newer versions of MD lenses where the aperture and focal length are now reversed and the filter diameter appears on the front ring and md2X when with orange ROKKOR-X or md2Xw when the ROKKOR-X marking is white ( for 50mm F 1.4 and 1.7 and a few others, i will add wether it is 49mm or 55mm since some lenses changed throughout the production of MD-II.
– md3 for all lenses that do not have the ROKKOR marking on the front of the lens. Except for the 35-70 F 3.5 and 35-105mm F 3.5-4.5, all lenses appear to have been produced the same way so these is the only lens i need to verify if and how is the Macro marking written on the lens.

Since standard lenses never had SDL and all except the 58mm F 1.2 also never lost their lens formula suffix, this limits the MC ROKKOR-PG 50mm F 1.4, the MC ROKKOR-PF 50mm F 1.7 and MC ROKKOR-PF 50mm F 2 lenses to either mc3 or mc5 but i can live with that.
This also gives me an indication of when (how early or late) a lens was produced since the disappearance of some features are often linked to a certain date.

Hi, very nice work there. But I wonder if I have an oddball on my hands. My 50mm lens has the marking “MINOLTA MD ROKKOR 50mm 1:1.7 LENS MADE IN JAPAN (diameter-symbol) 55 mm”, which would put my lens into a MD-II category, but I have thought that it has still optically MD-I -design, having that 55mm thread?

Hello. That’s not an oddball – this is MD II lens. You can find it on Dennis’s site – 135/3.5, 50/1.4 and 50/1.7 MD II lenses have two versions of each, one with 49mm and one with 55mm filter diameter. This classification isn’t linked with optical design – I think it’s impossible to create a classification based on it