There are several sources with Minolta lenses lists, but the most accurate is a “book about Minolta” with the separated part “Minolta Lens – Perfect Data”(pdf is here). It is attractive because this data is provided by the company itself. And it unambiguously sorts all Minolta SLR lenses into just 4 categories. And yet, unmistakably and with totally correct optical designs. It looks like a miracle after the classifications that are used among collectors (due to their high demands for details). I believe that for the average user this is the best source – simple and clear.

So, the moment came when I got tired of opening the pdf on page 97  and starting to scroll down, so I decided to put these incredible tables on the site simply in the form of pictures for quickly viewing.

The article – is the translation from Japanese, there is no my ideas. Additionally, in the bottom – the description of the differences between the Minolta lenses is presented, it is also very clear.

The “Minolta mount” appeared at the same time as the first Minolta SR-2 single-lens reflex camera and has been gradually developed. In total, the number of Minolta lenses is 277 pieces.

A complete line of Minolta lenses across generations.

SR – Introduced in 1958 as a lens for the SR-2 camera. It was the first multi-coated lens to be called “Rokkor Green”. There are also several lenses with a “preset aperture” design at same period. This lens was called the S lens, and its more compact version was called the C lens.

MC – MC is an abbreviation for “metric connector”. In 1966 it was added to the lineup along with the SR-T101 equipped with an in-hull open aperture metering system. It uses the pins on the rear side of the aperture ring so that the selected aperture value and exposure meter can be linked.

MD/New MD – Lenses introduced in 1977 with aperture/shutter priority. The New MD, which appeared in 1981, added an maximum diaphragm locking mechanism (the ROKKOR name was removed from the New MD). The “D” in MD means “dual mode”.

A – This line of the lenses was released with the A-7000 in 1985 and uses an all-new A-mount. Aperture is operated by electronic inside camera, so there is no aperture ring.

How to read the lens datasheet

The evolution of Minolta lenses for single-lens reflex cameras

Minolta’s mounting specifications have changed as the body mechanisms have improved.

The Minolta mount, born in 1958, was used as the primary mount for single-lens reflex cameras until 1985, when the A-mount was introduced. In the meantime, the Minolta mount evolved gradually, such as adding an aperture frame pin in response to body evolution. Each lens is named SR, MC, MD, NewMD (stamping “MD” remains) by generation. Minolta mounts are three prong bayonet type with a concave notch (groove?) in one of the pins. Mounting inner diameter: 45 mm. Rear flange: 43.5 mm

The A mount used in the A lens has a slightly larger diameter than the Minolta mounts used so far, and the inner diameter and rear flange are also different. The first four contacts are the electrical signal contacts on the mount. Most lens controls, such as aperture value, maximum aperture, distance, and zoom-magnification, are transmitted to the body using electronic signals. The mount format is the same as the Minolta mount, but it does not have the groove that the Minolta mount had. Inner diameter: 44.8 mm Rear flange: 44.5 mm

Minolta mounts are divided into three generations: SR, MC and MD lenses, and MD lenses will be converted to New MD lenses. Consider the features of each lens.

The MC lens has an exposure meter link pin (MC). The presence of this pin made full aperture photometry possible. On the MD (New MD) lens, in addition to the MC pin, the MD pin has been added to transfer the maximum sensitivity value of the lens to the body.

When the aperture is set to maximum position and the lock is moved, the aperture ring gets stuck. This is a handy feature for shutter-priority AE on XD cameras, XD-s, etc.

SR lenses have a locking lever. Depending on the generation, there are variations in the shape of the stop lever, such as the shape shown in the photo, semi-circle, lever type etc. 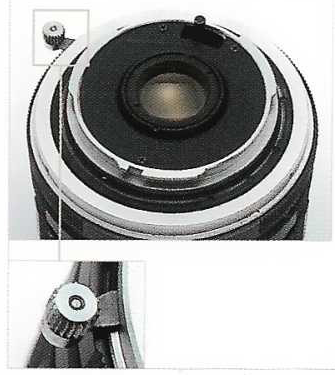 The new MD lenses introduced in 1981 have a small pin inside the mount. This is an “fast f-number” transfer pin (lenses faster than F4). 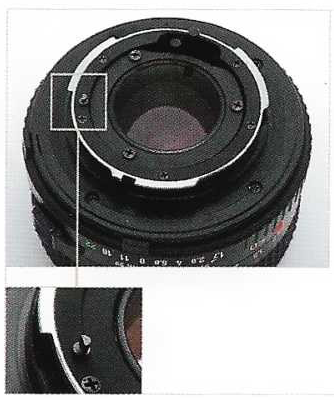 Finally, I think it’s worth adding important information not from the book, but from the well-known Minolta specialist – Andrea Aprà. Here’s what he had to say about some of the important features of P mode. This is important for understanding the differences between MD and MC lenses – what happens if photographer didn’t set the minimum diaphragm in the P-mode on X-700 or XD (S-mode for XD). 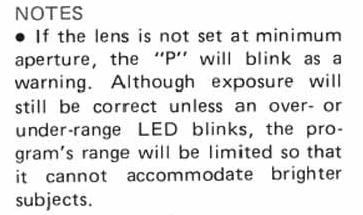 … In cameras with photocells on the prism there is normally a memory circuit that blocks the measurement before raising the mirror and takes into account the value of the so-called “diaphragm simulator” (MC lug) to precisely simulate the light that will actually fall on the film after the diaphragm has closed.
Only direct measurement models, such as the Olympus OM2 (and similar ones, such as the Minolta CLE) take a reading in real time on the curtain (made reflective by drawings or white spots) or directly on the film and adjust the exposure in real time.
The Minolta XD and the X-700 do something in between: they take a measurement with the mirror down but with the aperture closed. It’s not a real-time reading but neither is it one that uses the diaphragm simulator.
All of this obviously can only be done with silicon light meters which are ultra-fast. You can’t do it with CdS light meters which are slow and could never make these measurements in fractions of a second.”

Hello, it is so. I have added to the end of article the description of this case by Andrea Aprà