By one of the popular collectors classification this lens has two main incarnations – AR II and MC I. This review – strictly about AR II.

(There is also AR I version is mentioned on the minolta.eazypix.de but it is a mistake, only AR II and MC I are existed. Please correct me if I’m wrong)

Interesting detail: there is a misprint on the box: “FP” used instead of “PF”, the photo was borrowed from here: 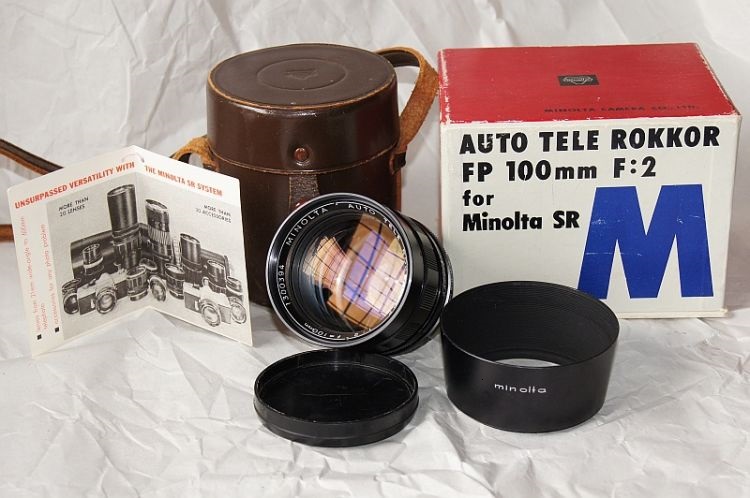 This is not the reviewed copy on the picture above. Also I have to say that reviewed one 100/2 was come with metal front cap and with black leather case. Which combination is correct I don’t know, probably both (need more information):

This lens was a huge surprise for advanced collectors. The fact is that for a long time it was believed that Minolta produced only two radioactive lenses – Rokkor 28/2.5 and some early Rokkors 58/1.2 – you can read about these lenses in the relevant reviews. By the way, there is a steady rumor on the Internet that the early Rokkors 85/1.7 are also radioactive, but this is not true – not a single case has been recorded in reality.

So, on June 29, 2022, Darrell Owens entered the collectors group on Facebook and said the following:

“A couple of weeks ago I took some photos of my probably most-prized Rokkor… an early and radioactive 100mm F2.”

Such the mention about radioactive Rokkor 100/2 AR-II made the community nervous (better to say – the community was exploded). But very soon, we got information from Maury Jacks and Han Fiasco, who quickly measured their lenses and found out the following,

Just imagine – 61 years have passed since the release of the lens. Such stories with an unexpected ending make the measured life of collectors a little more exciting.

The reason of this surprise looks simple – despite being radioactive, these lenses do not turn yellow. Until now I have come across or read about radioactive lenses mostly with a yellow tint. Although, yes, I suspected that a yellow tint was optional, since radioactive impurities in glass can be of different types, but Minolta’s image was superimposed as a company that rarely produced such lenses. In principle, nothing has changed – before they had 1.5 of these models, now another half of the model has been added (you remember that not all copies are radioactive).

According to other posts from Han Fiasco, who checked some more of his Minoltas huge collection, no more surprises were found.

(By the way, I’m wondering – Japanese collectors and photographers didn’t know about it either? Or is this news only for collectors from other countries?)

If you are a photographer, you can safely skip this part.
For those who are collectors, I will simply describe the main points so that it would be more convenient for you to dig further. Due to the rarity of this lens, there is really little information about it in open sources, so please contact advanced collectors with questions.

This is the list of signs by which lenses may differ:

So, collectors distinguish approximately seven modifications of the AR II version based on this list. The word “approximately” is used because there are references to lenses that may not be real, but have a chance to be so.

In all the reviews on this site, I specifically do not make direct copy-pastes of messages from those collectors who have done their own research. Only if I get express permission. This is a common courtesy to other people’s achievements. I repeat: if you want to study the classification and historical issue in more depth, then please refer to the primary sources among collectors.

There is some confusion about lens hoods for this lens.
Firstly, the D65KA indicated on the “minolta.eazypix.de” looks like non-existed in reality, so I fixed the specifications in this article because of the next great advice by Andrea Aprà(c):

“Apart from that this lens shade appears only in the literature and no one has ever seen it in reality, in any case I would replace this with the more well-known lens shade with code D62NA.
Then we could discuss which of the two editions (the first is conical and the most recent is cylindrical) is the one compliant with the lens presented here with the LMiJ writing on the front ring. Personally from what I have seen it is the cylindrical model.
Unfortunately this is one of the sad cases where Minolta uses the same code for two different objects.”

I was not able to find a lens shade for the review, so, these are the “images from somewhere on the internet”:

There are a few more details can be found here. 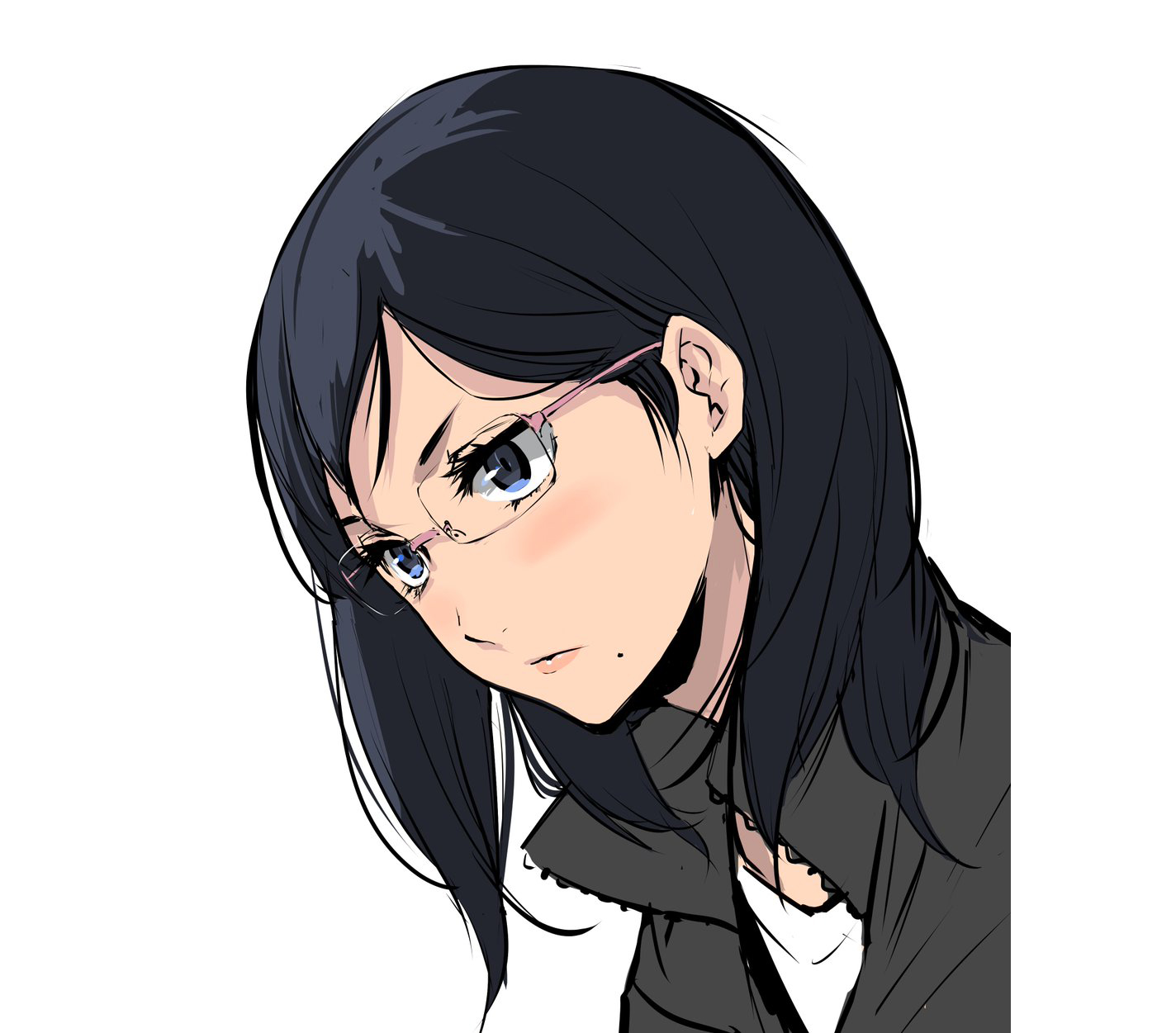 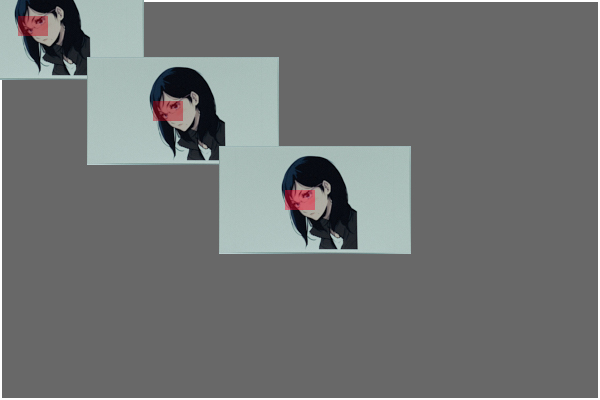 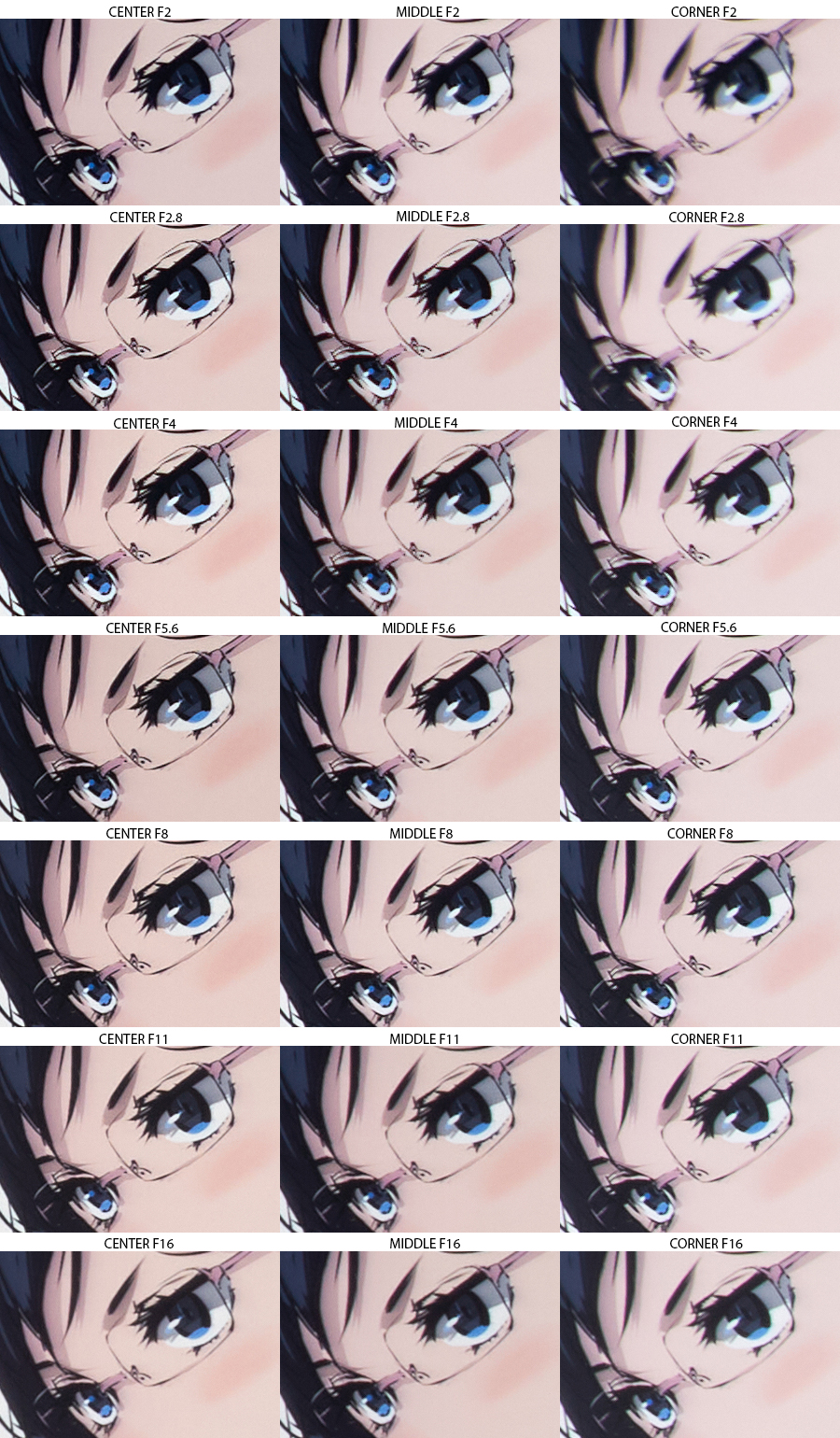 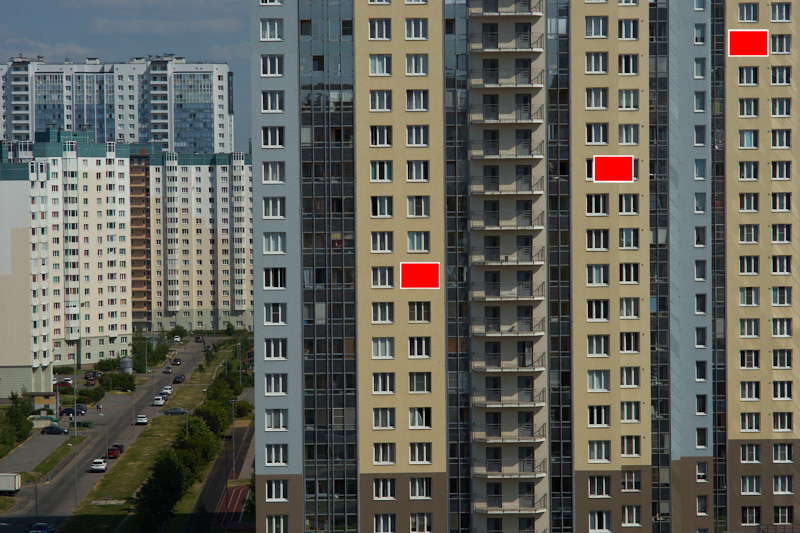 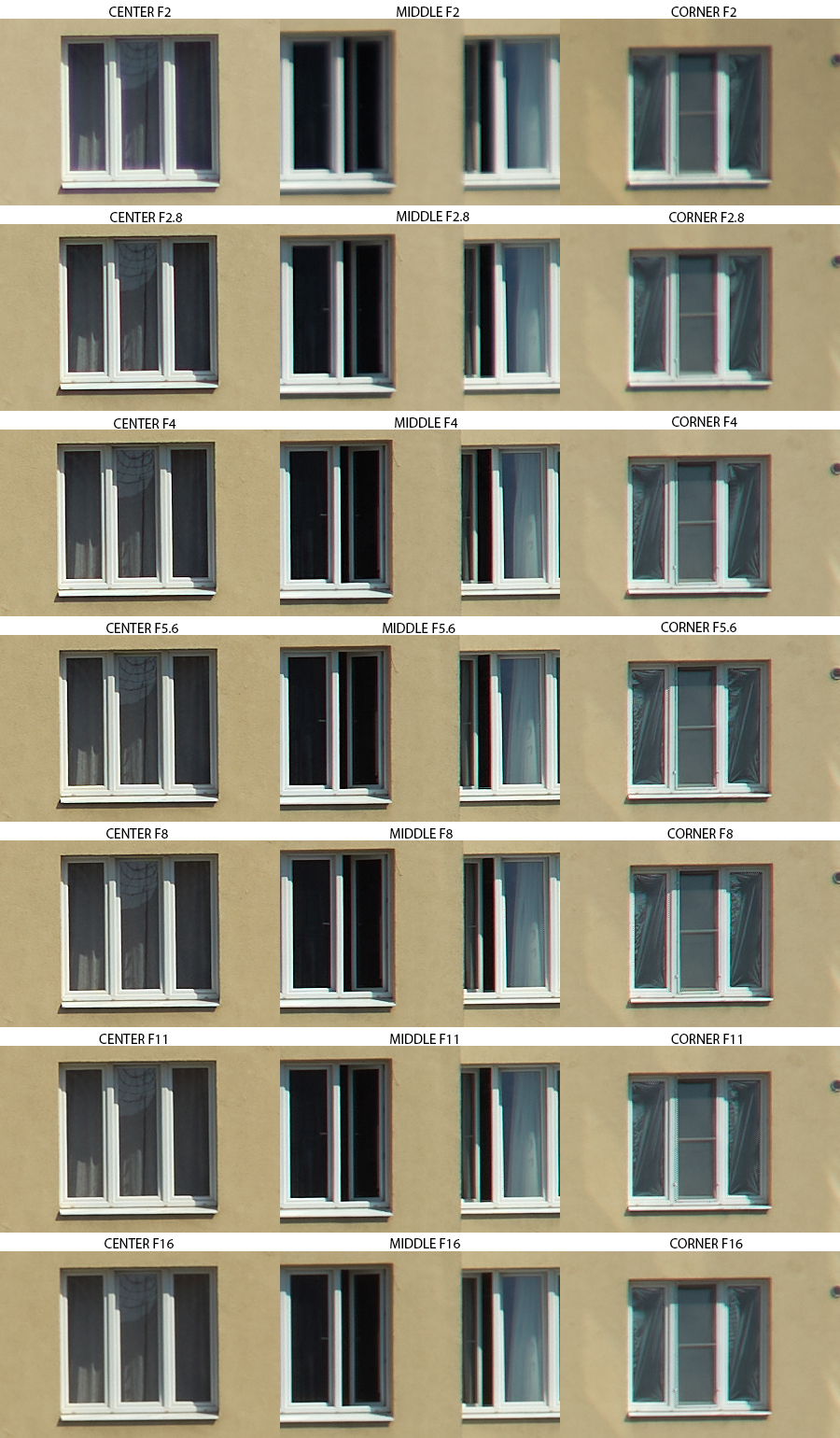 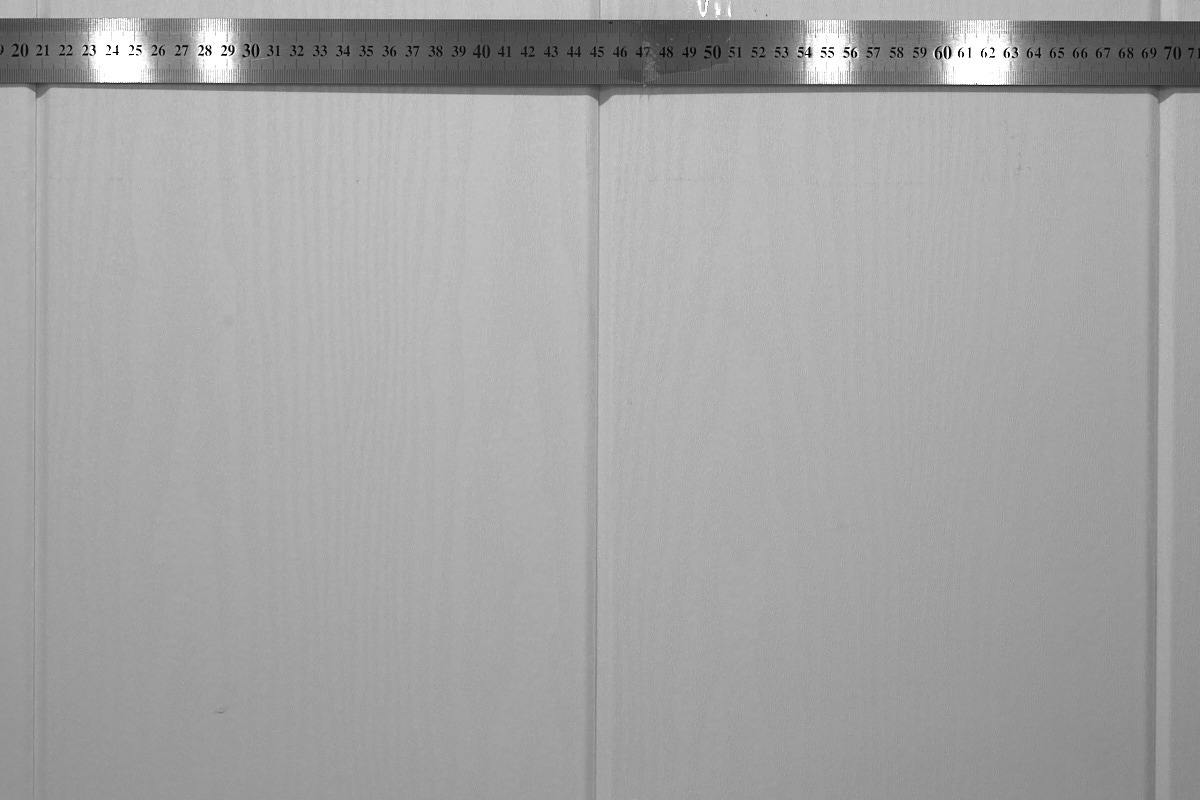 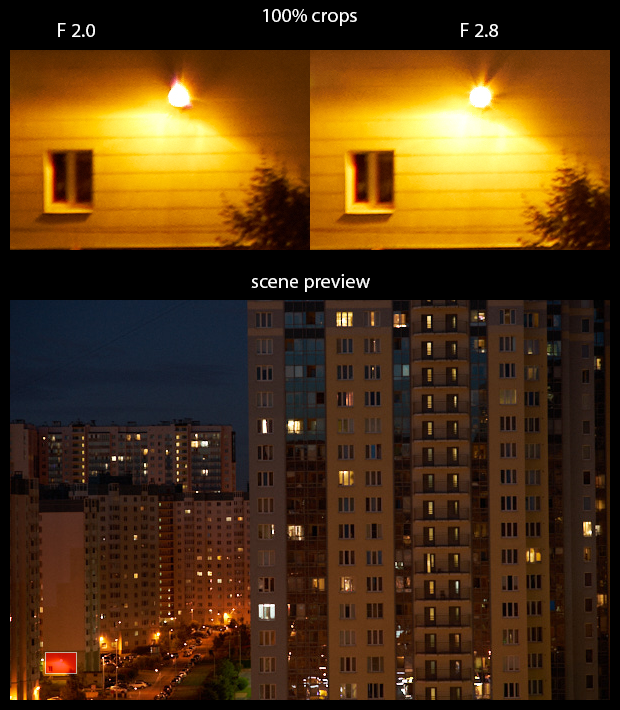 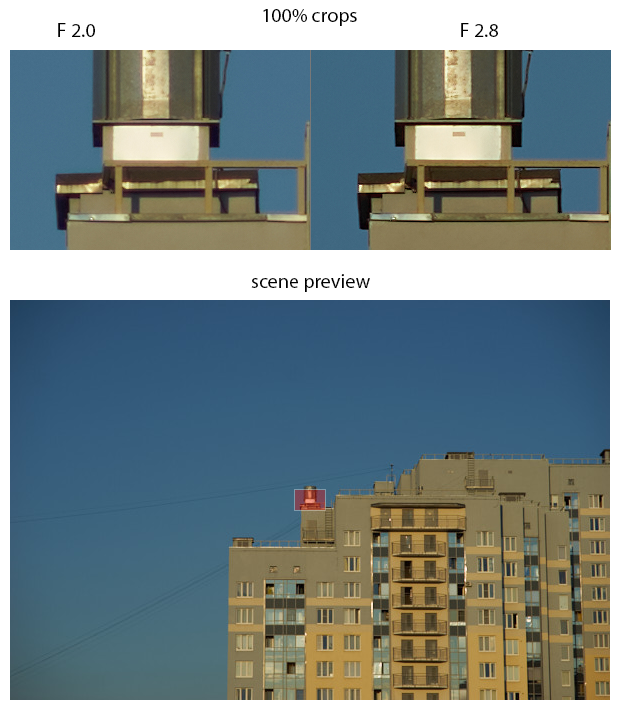 Test conditions: the lens was focused on minimal distance on the scale (1.2m), buildings are on “infinity”-distance.

The lens is on the minimal focusing distance 1.2m, lights are on infinity (cityscape)

Should I recommend this lens to Collectors? Of course yes. It has so many wonderful unusual sides that it is impossible to pass by. I even think that after the story of the discovery of radioactivity, this lens will become even more valuable.

The question is more complicated – is it worth recommending it to photographers? You can see the test results yourself. The secondary features are in order – vignetting, geometry, chromaticity, coma – mostly look quite good. But, as expected, from the sharpness point of view the open aperture is not its forte. On the other hand, F2.8 is good for portraits, F4 looks amazing for anything and F5.6 is ready for landscapes with modern digital requirements – very nice result.

Let’s go further: it has two strong advantages, namely a huge front element and a huge rear element. Just look at the bubbles on 3 meters focusing distance – truly “Hollywood-like” portraiture view. The result is something like one from the bokeh-monster – legendary Rokkor 58mm f1.2 but multiplied by two, which is in terms of focal length, which is in terms of fastness.

I need to underline my feelings of this lens: it is not champion because of IQ (just look at MD 100mm 1:2.5 – that is the resolution bomb for 100mm distances), but if to sum its IQ with its aberrations – then we get unique art-tool. It requires skills from photographers because needs the hiding of disadvantages, but in good hands (or just a luck) it will give a few masterpieces.

The lens is very hard to find, and the copies that are sold are insanely expensive due to the collector’s price – I didn’t see exclusions on popular auctions for a many years. Therefore, I can’t say that it is worth buying for everyone, my opinion: this is a really good lens for those who know how to use old-school bokeh and lack of sharpness at open apertures, and it can also be recommended to everyone who is interested in not only IQ lens, but also its historical value.

Great read and thanks for the mention!