I would like to share some observations about the focus point position that accumulated during lens testing. This is a quite long article, mostly not about tests only, but about differences between ‘similar’ lenses so it can be interesting for those who are involved in collecting or lens testing.

A lens amateur test results usually look like this:

This test result diagram with 100% crops of the frames which were made with different apertures displays all that can be expected from an abstract lens on infinity distance:

The overall idea can be illustrated with this simple scheme: 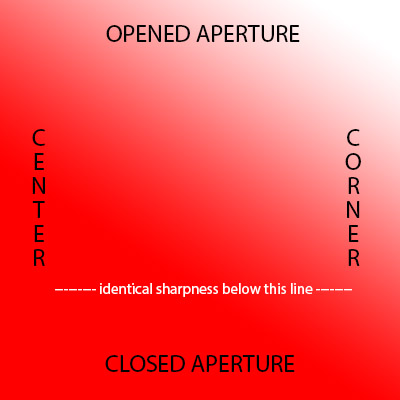 (Note for perfectionists: it looks so for most cases. Lenses with another behavior, of course, exist just can be met rarely)

Field Curvatures and Where to Find Them

Periodically, I meet comments that sound like this: “all tests do not show reality, because there is a curvature of the field of sharpness (Petzval field curvature is mentioned).” That’s it, without details. But the fact is that it is in the details that the essence lies, in other words – it isn’t true about tests.

By the way, tests show reality as many as it possible – amateur testers use real lenses and cameras, so, everything that you see – is real photos have been taking with real gear. The problem lies on another side – if so, why not every photo can be considered as a test? But it is another big story, not now.


The field curvature (Petzval field curvature) is simply an understandable effect and presented for most of the lenses more or less. It can be easily compensated during the tests. All we need is just focusing on every position which sharpness we want to evaluate:

Yes, it’s an X-times bigger amount of work for a tester, but it worth the effort – the test is very useful for understanding sharpness deviations on the close and middle distances.

This is the number one standard test on the lensQAworks site and can be skipped only for abnormal lenses, like fish-eyes, converters, etc. This is only testing about sharpness/resolution.  But the next one – “sharpness on infinity distance” is about the combination of sharpness, field curvature, and other aberrations affect. 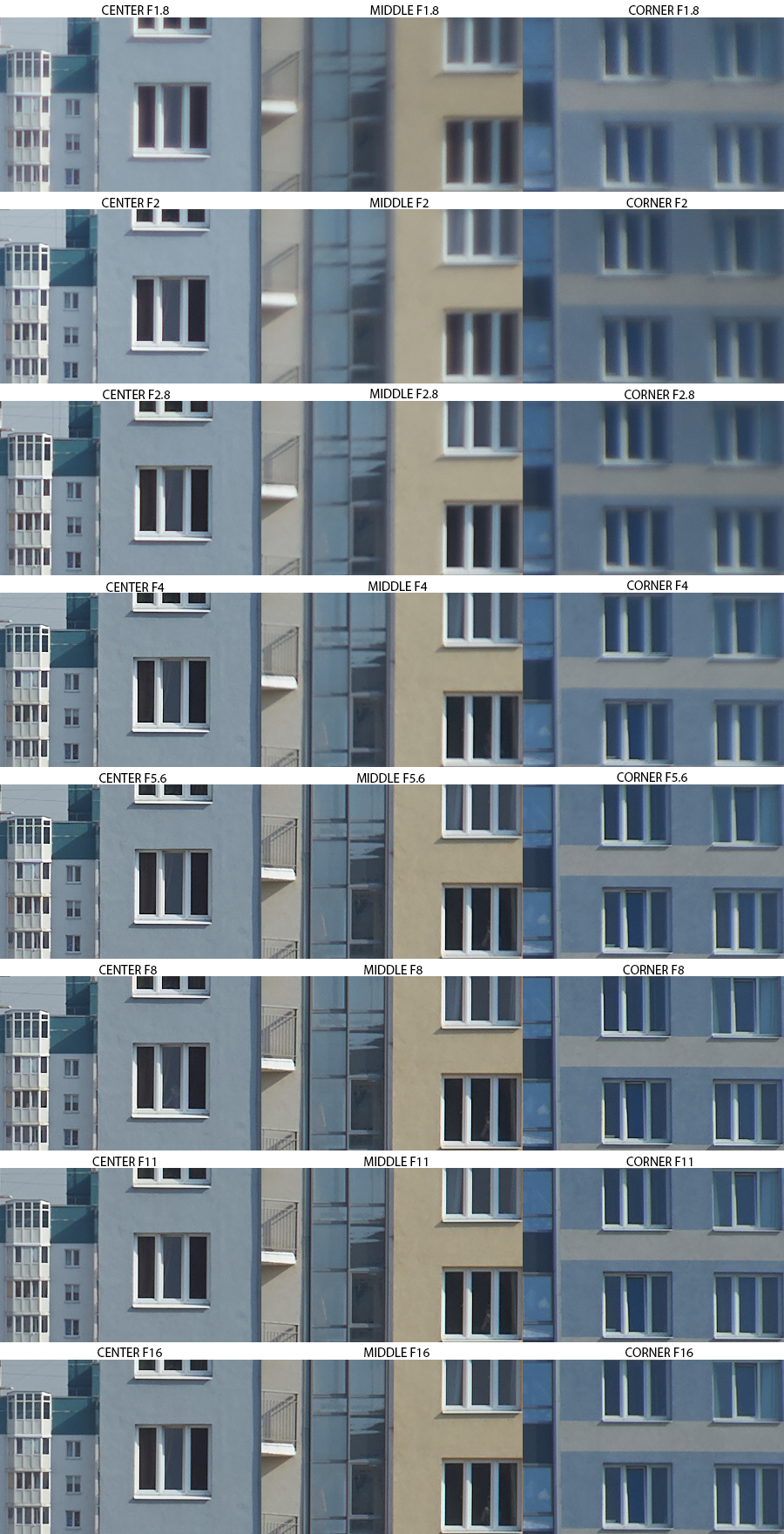 Instead of the previous test with field curvature compensation, this one is absolutely no synthetic and shows clearly what we will see if using the lens on distances up to the skyline. Technically, it is close to hyperfocal distance, and this detail is important.

(note for perfectionists: I tend to fix vignetting effect, but it doesn’t change the sharpness for spectator)

So, the question is: do we need a test with field curvature compensation on infinity distance, additionally to the first test on close distance for better understanding of lens behavior? Let’s check it. 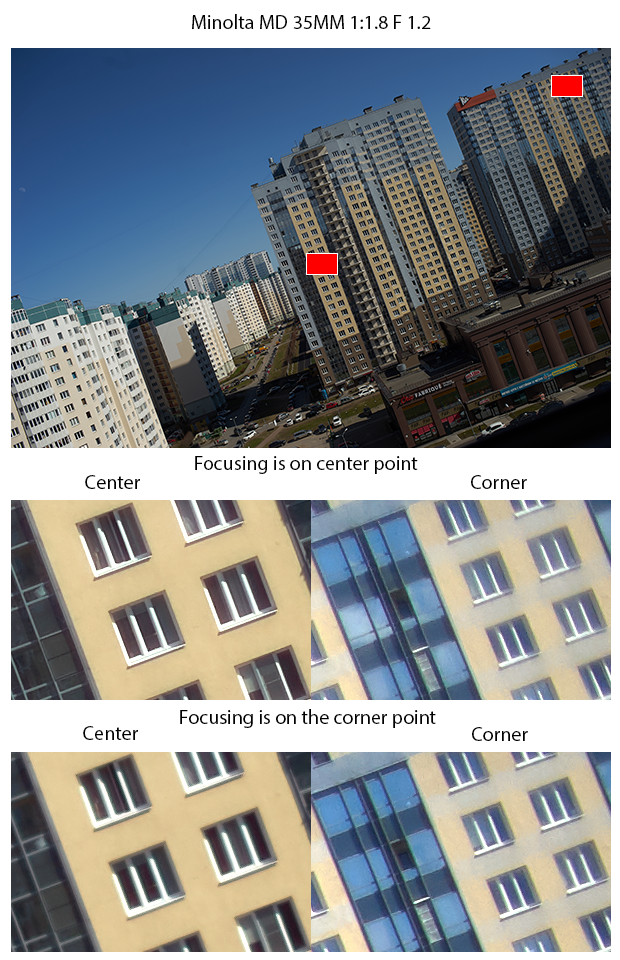 There is not a huge improvement for the corner in the second case, by the way. Did you notice?

Let’s take another lens Minolta New-MD 50mm 1:1.2, copy SN: 8008540. I was so surprised by the first result, that repeated it the second time the next day with a little bit changed position. I attach both variants as proof that it isn’t mistaken:

Unbelievable, for this lens it does not matter what to be focused – corner.. center… It looks like an absolutely flat curvature field.

OK, how about checking it with another copy of Minolta New-MD 50mm 1:1.2 (copy #2 SN:8002838)? This test also had to be repeated twice. But the reason is another: it is absolutely different from the first.

Nice. This test displays the expected result, we have a lack of sharpness in the center position if the lens was focused on the corner – and it visible very clearly. Just one problem – there is no visible increase of sharpness on the corner.

But… Two copies of the same lens show so different behavior. Both should be compared immediately: 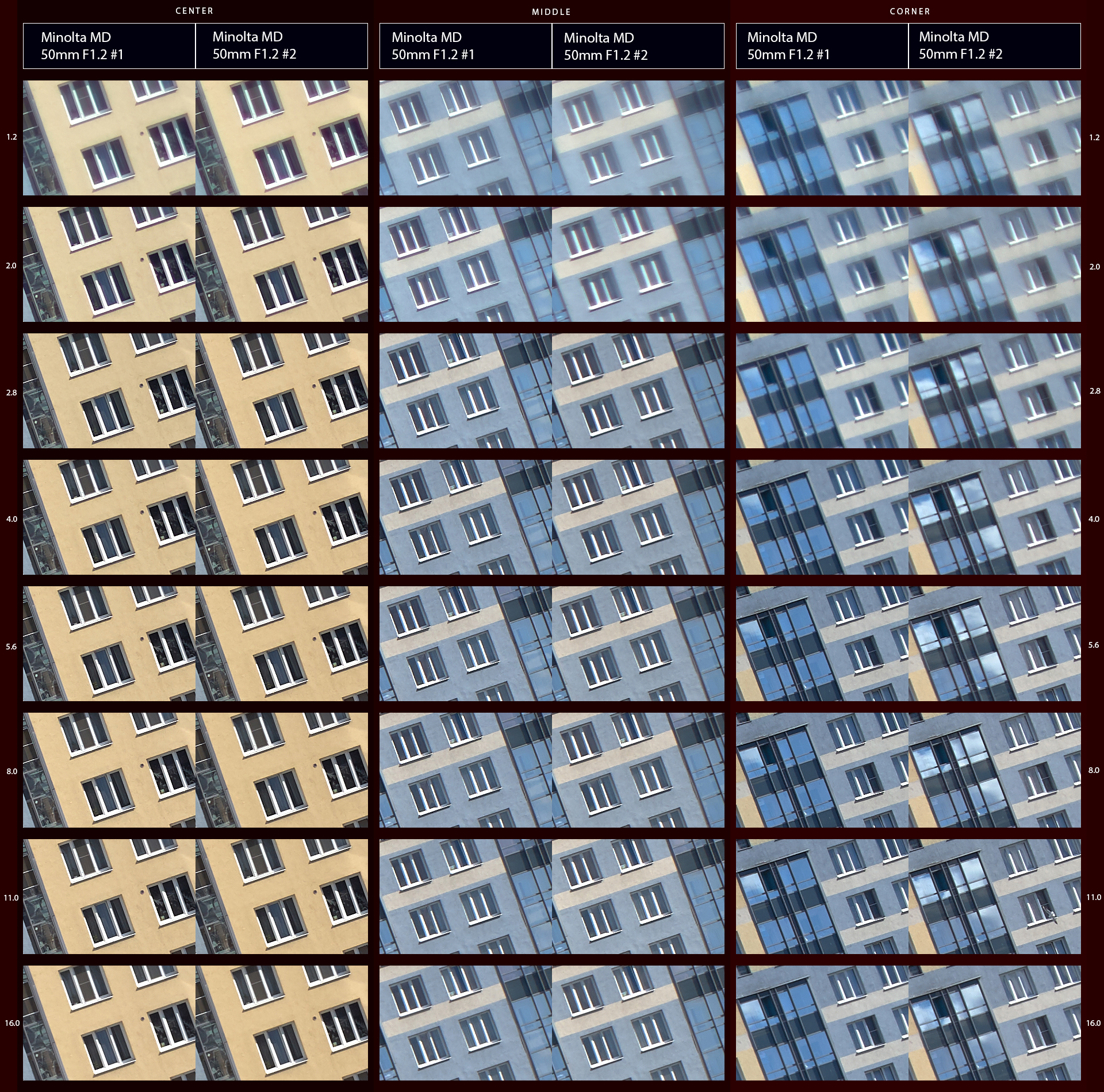 Yes, the difference can be easily seen. It’s hard to say what one is better because both have advantages in some positions. But no doubts – two copies of Minolta New-MD 50mm 1:1.2 have different sharpness distribution over the frame. That’s deviation looks very slight and it’s hard or even impossible to be spotted in real photography.

Does it mean that the previous test with changing of the focal point can help to understand lens behavior? No need to hurry, that’s not all.

As you can see, the same difference as in the case with two MD 50/1.2 is caught here:

Let’s see the difference between these two lenses: 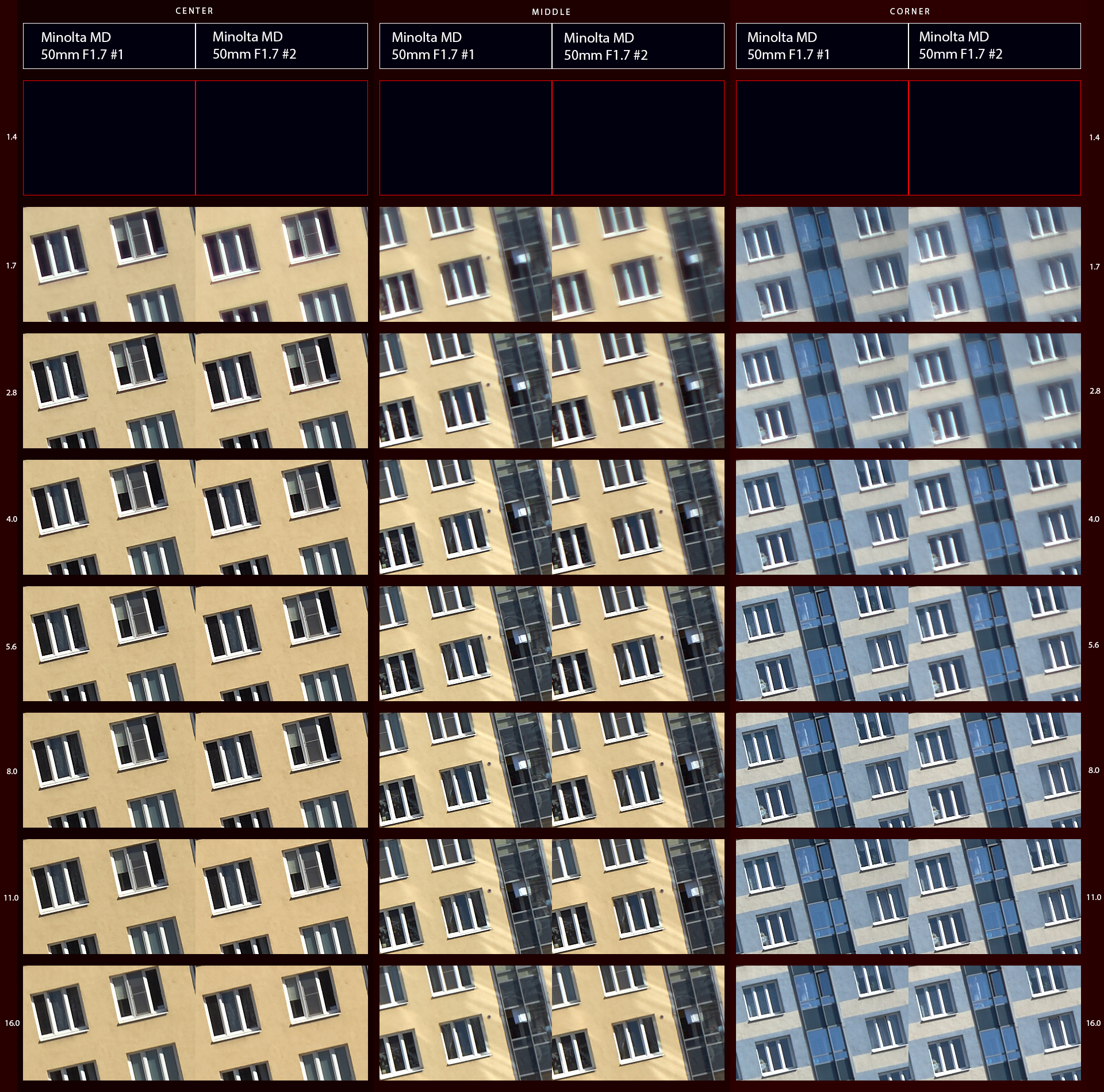 I can’t call these lenses as twins, because it’s possible to spot the slight difference in the corners, but both work enough similar.

This is the time for very important note:

All tested lenses are in beautiful technical condition. There is no need to imagine, that everything is because lenses were damaged – they are not new of course but still in very good condition for that age. Later I will publish a few additional comparisons of two copies for different lenses. It will help to better understand deviations of IQ.

These tests will be marked on the site as ‘Lens Romantic’, opposite to ‘Lens Wars’.

Let’s return to the main question: does the test with changing of the focal point can help to understand lens behavior?

Not really. As you can see – in any approach, the visible difference in the corner position is not enough to understand anything. We just see corners with a permanent lack of sharpness and center which can have a good sharpness or bad sharpness but without a specific correlation with an image. In other words – the classic test on infinity with the central focus point gives as enough information about the lens. So, the moving the second point to another position wouldn’t give us more. That’s the reason, why in LensBattles in most cases using shootout on infinity and additional tests with field curvature compensation on short distances are adding only if a comparison requires more details.