This lens is from the first years after WWII and it’s a part of the history of Japan’s photo-industry, from the times when the poor and the ruined country started the race against the world’s most famous corporations producing photo equipment and finally have won. The reason is clear – one glance at Super Rokkor 85mm is enough to see that it was created and built with incredible quality. Touching this lens drives me to feel that I touch history.

Some amateur photographers say that they love real ‘glass and metal’ lenses, and this feeling drives them to create better photos than with lenses that are built using plastic and rubber elements in construction. Quite often when saying these words they are holding in their hands something like Minolta MC or Canon FL or Nikon pre-AI, etc. I believe that these MC and FLs against this Chiyoko are looking like aluminum trinkets. 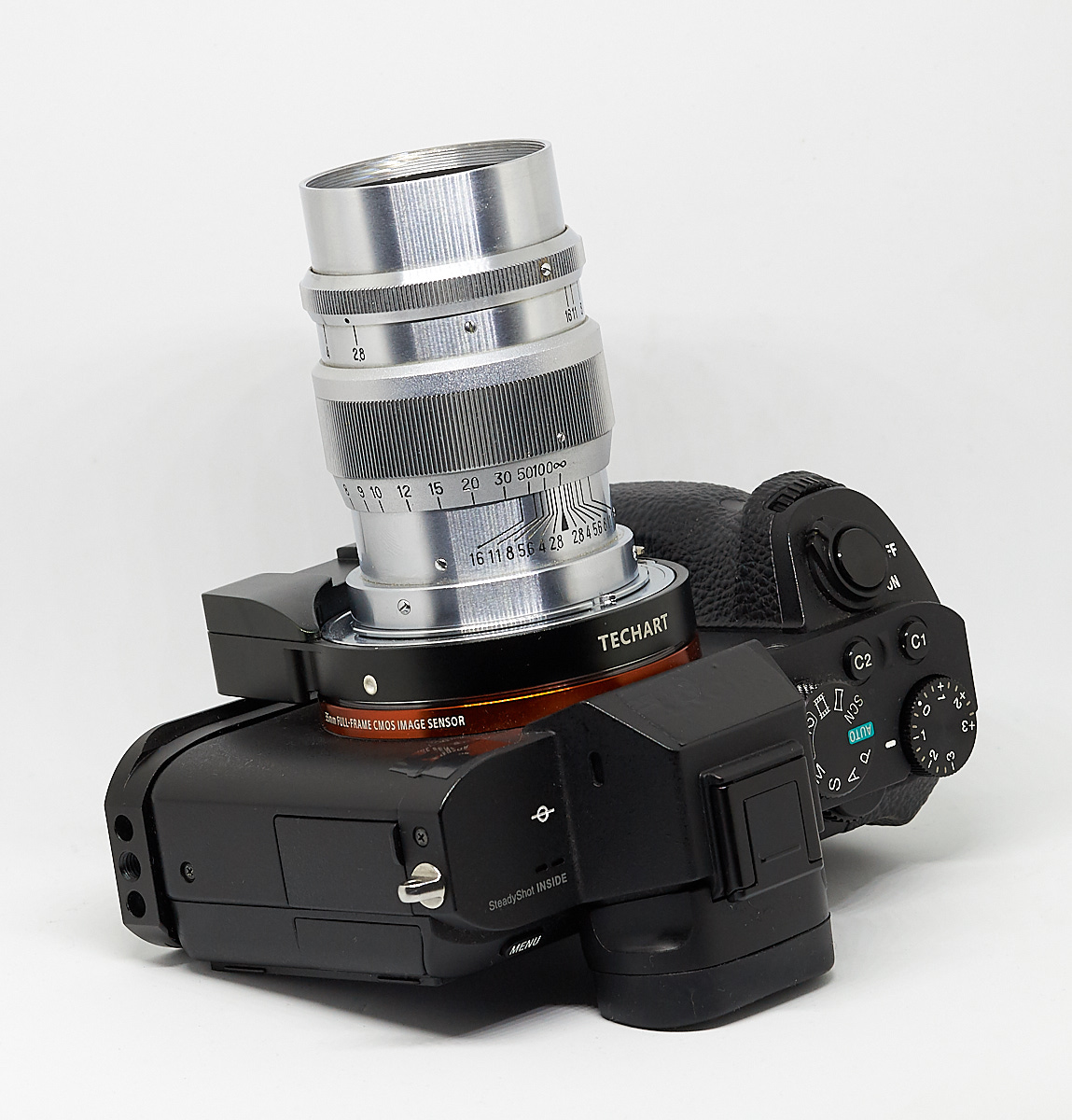 There were two reincarnations of this lens and the reviewed one with SN.5226 is from the second generation. Also, it can be recognized by a thick bottom base, because the first edition has two thin rings at the bottom.

The example of the first edition (the photo taken on the internet): 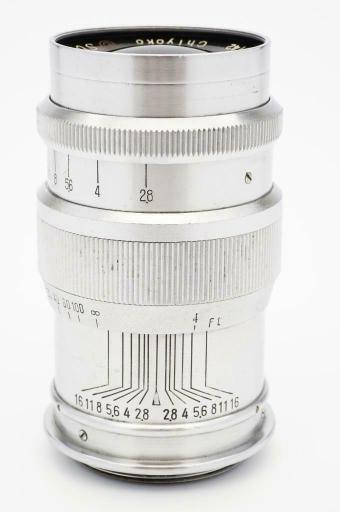 The quote by Andrea Apra:

“… The second has a thicker base and is beyond the #5000 serial. The dates for this (first) model aren’t well known. It is known that it begins in October 1948. The change on the second edition could be a few months in 1949 or even later. The total estimate of the pieces produced on the two series is around 3500 pieces. This is because there are no known exemplars under the #3000 serial and therefore there is the hypothesis that the first is the 3000 or 3001. But it is an idea subject to denial if an exemplar with minor serial will be observed.“

And a few words about the production:

… On these things it is impossible to decide based on appearance. At the time (but also later) we must be aware that the production of every single piece of Minolta is absolutely not to have occurred always in their plants. There are a myriad of sub-suppliers who make the components. Just think of the car industry, big houses live on the supplies of many that produce from wheels to electronics, from headlights to seat leather. For photography it is no different.
But there are always supply specifications. Each supplier works according to the customer’s request and cannot produce things as he decides.
For our collectors we have to work in a pragmatic way, in fact we don’t care so much who really makes the pieces, what interests us is that the assembled set or the pieces sold together are like those left the Minolta factory after their assembly or that someone put them in the case and this in his box. We don’t want alien objects put by someone to replace those lost or sold.
In general it is quite easy because:
– it says “Minolta” (and not “for Minolta”, which isn’t the same thing at all),
– if I open a package (or a set) of the same object I also find the same parts.
So if you look more at 85/2.8 for Minolta 35 and you always see the same lens shade, I can correctly think that:
– Minolta has decided that this lens shade should have that matt surface (and not its supplier, because that is the supply contract specification),
– Minolta has decided to save money on the processing to be done by its supplier, avoiding having a brilliant treatment even for reasons of cost,
– Minolta decided not to put his name on the lens shade,
– all lens shades for that series are like this.

For some points I might not at all agree with the choice of Minolta and I would have preferred a product more beautiful to look at and with the word “Minolta” on it, but I am convinced that the decision is by Minolta and not by the supplier. On motivations we can not say anything, we weren’t in the rooms where they took these decisions and no one can tell us anything now. 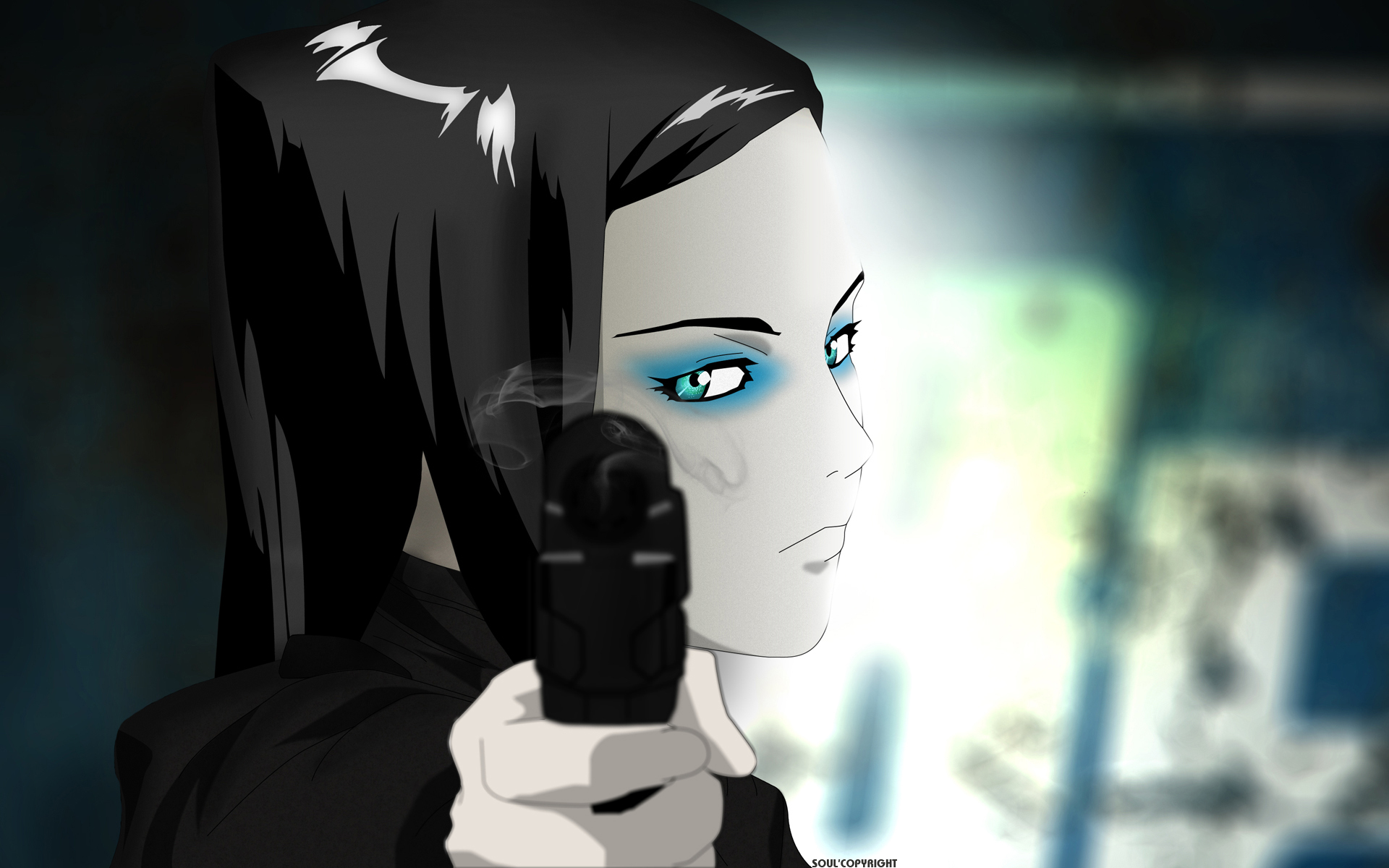 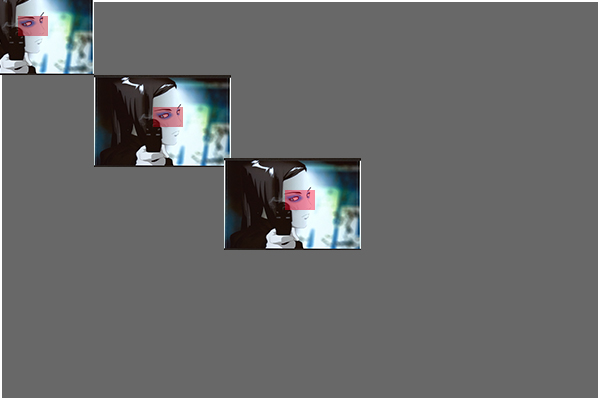 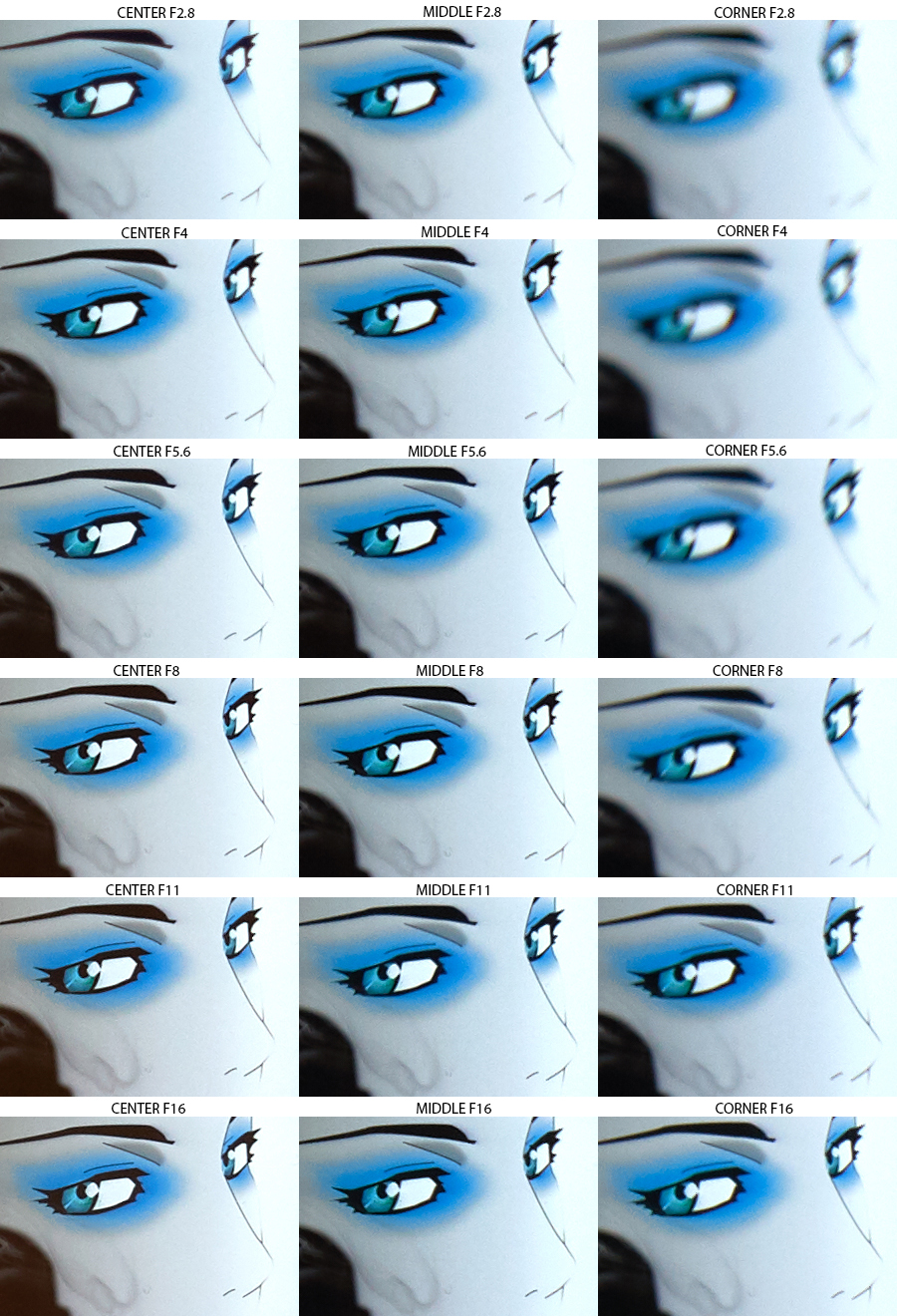 (note for perfectionists: do not pay attention to the slope of the horizon, it was necessary to bind the image to certain points) 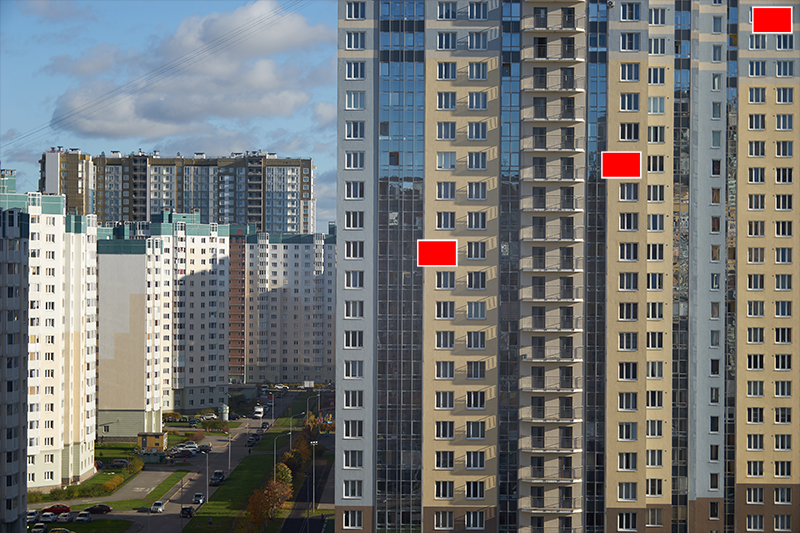 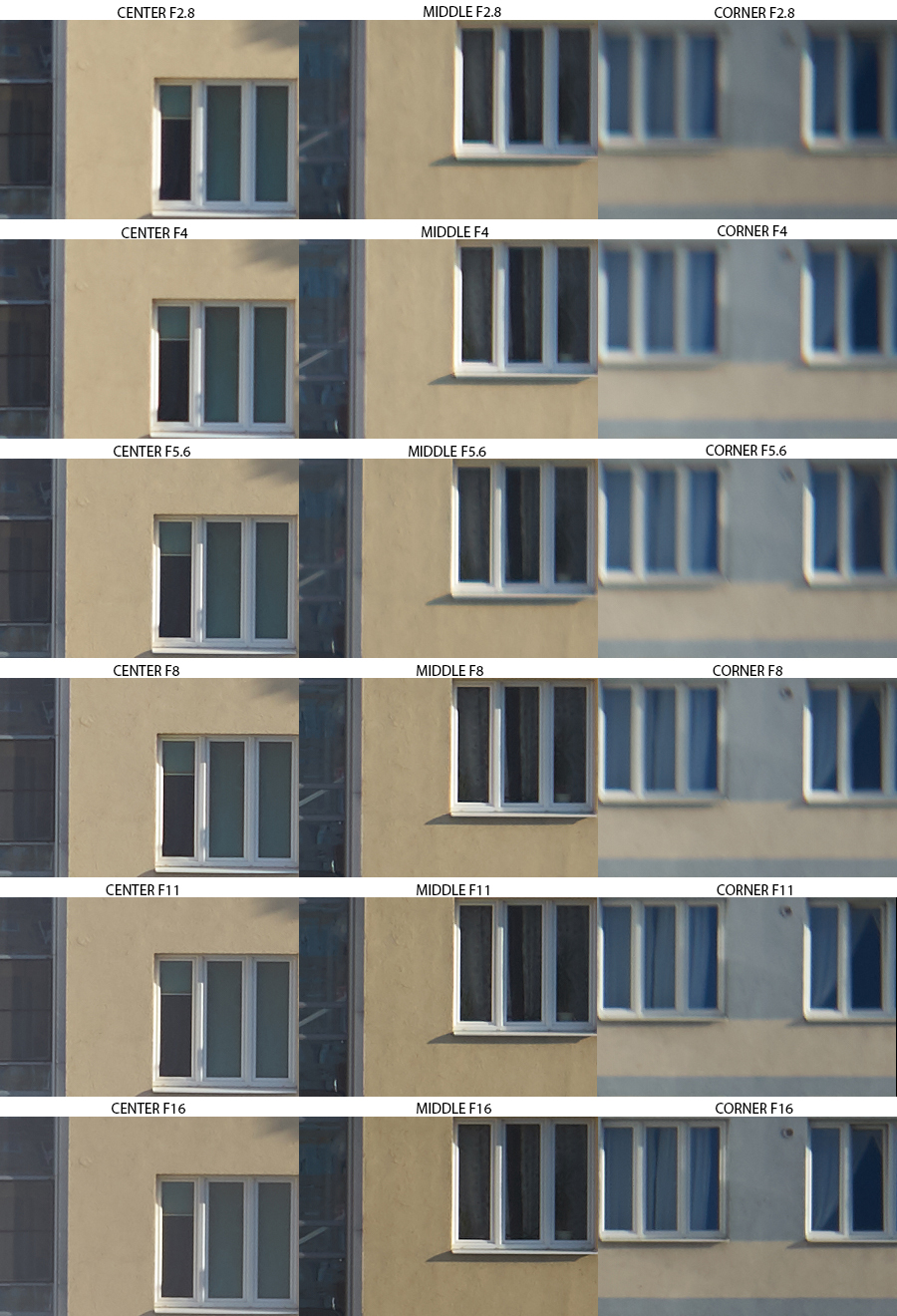 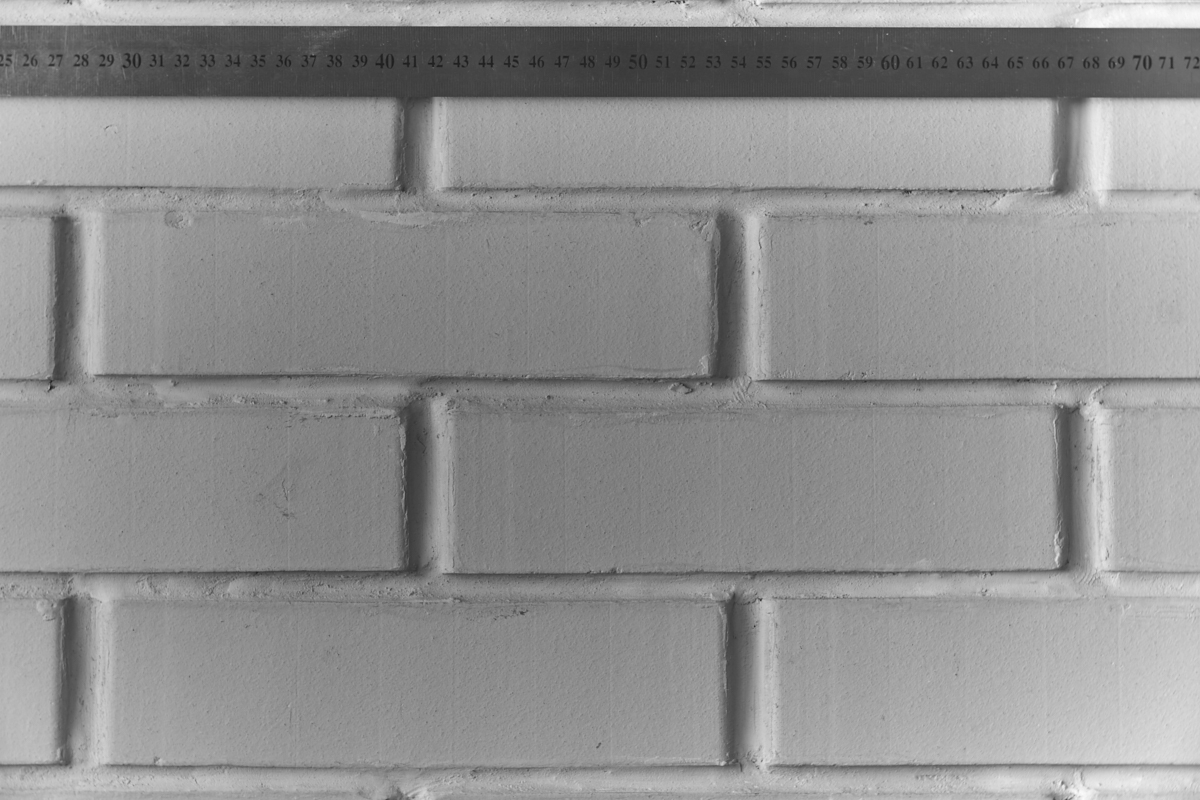 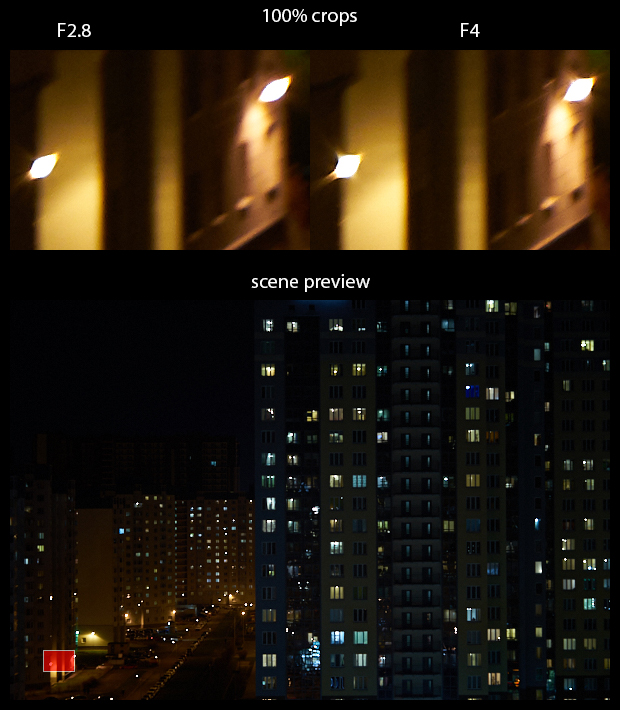 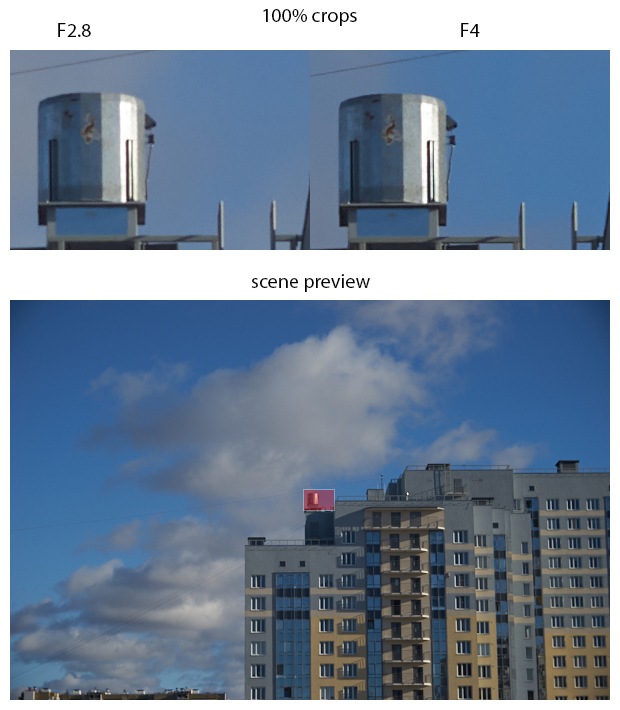 Test conditions: the lens was focused on minimal distance on the scale (1.35m), buildings are on “infinity”-distance.

This is a rare case for real photography but demonstrates the maximum possible level of blur. 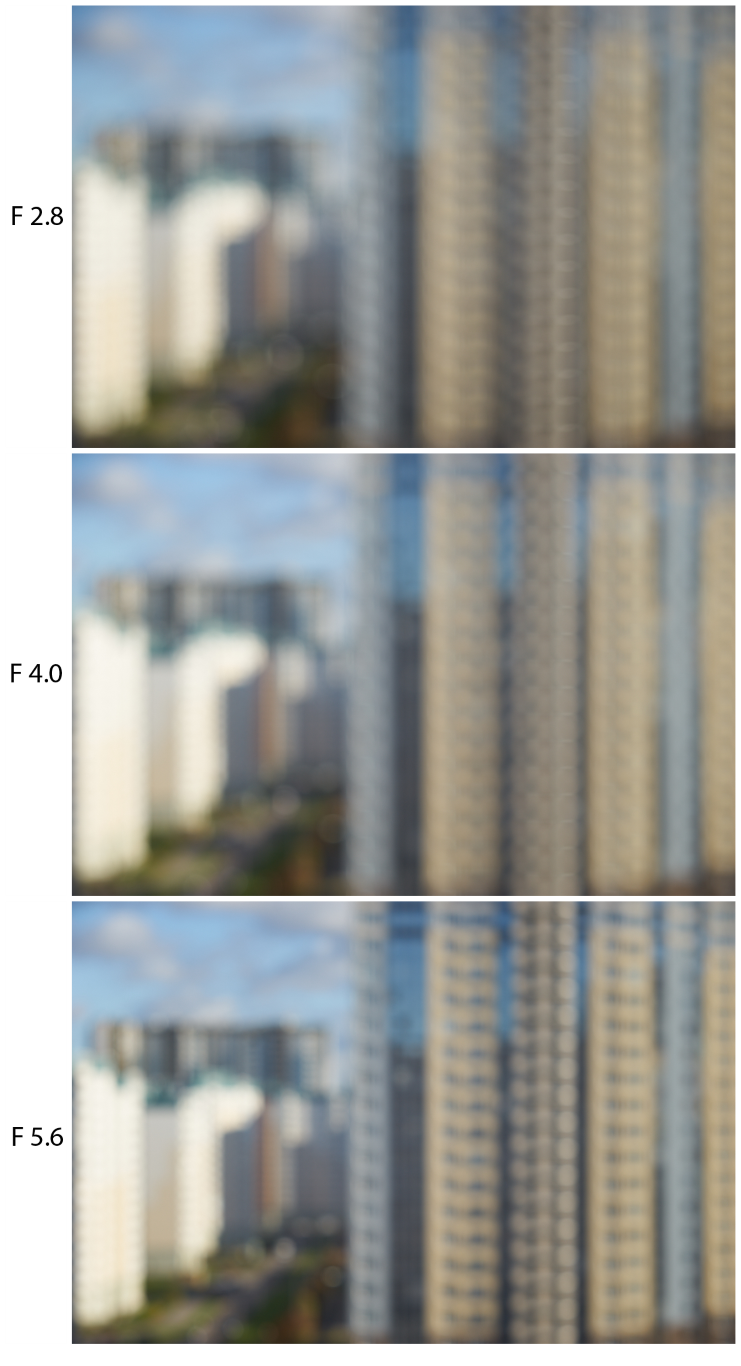 Test conditions: the lens was focused on half distance on the scale (3m), buildings are on “infinity”-distance 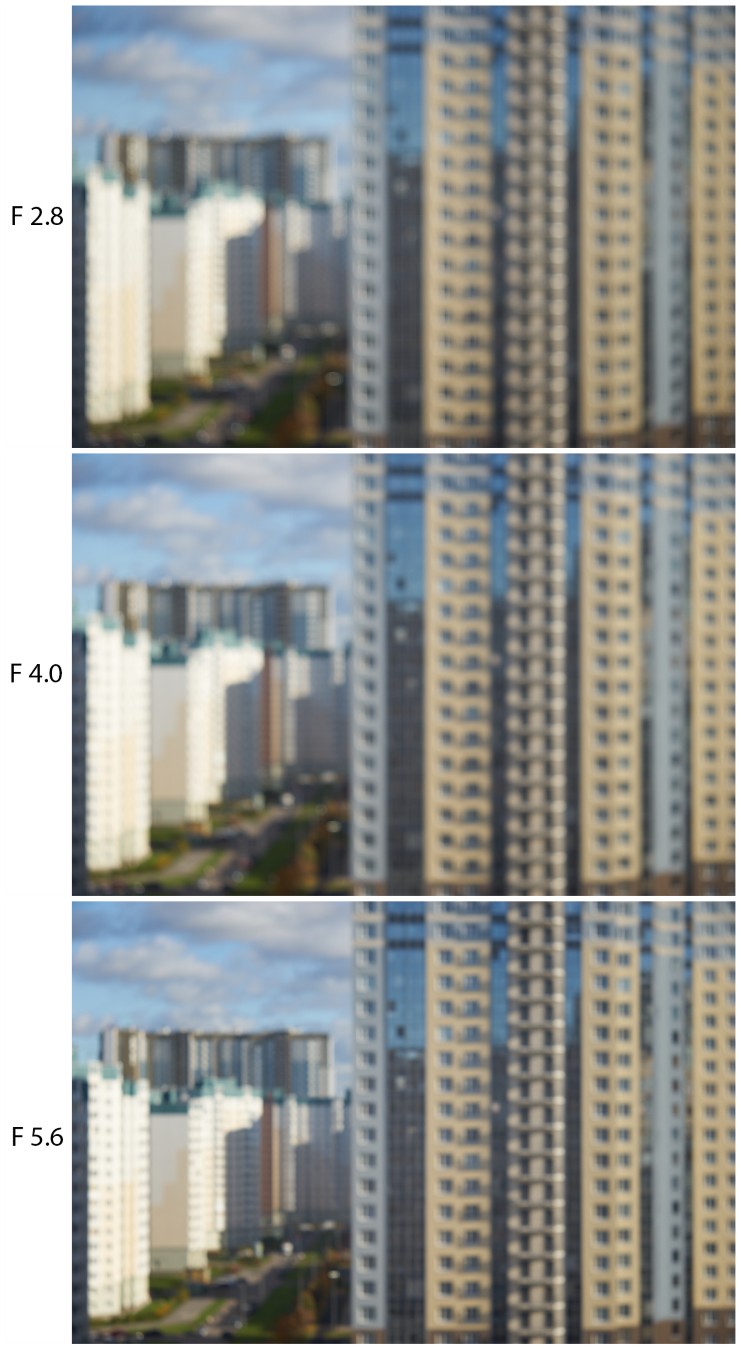 The lens is on the minimal focusing distance 1.35m, lights are on infinity (cityscape) 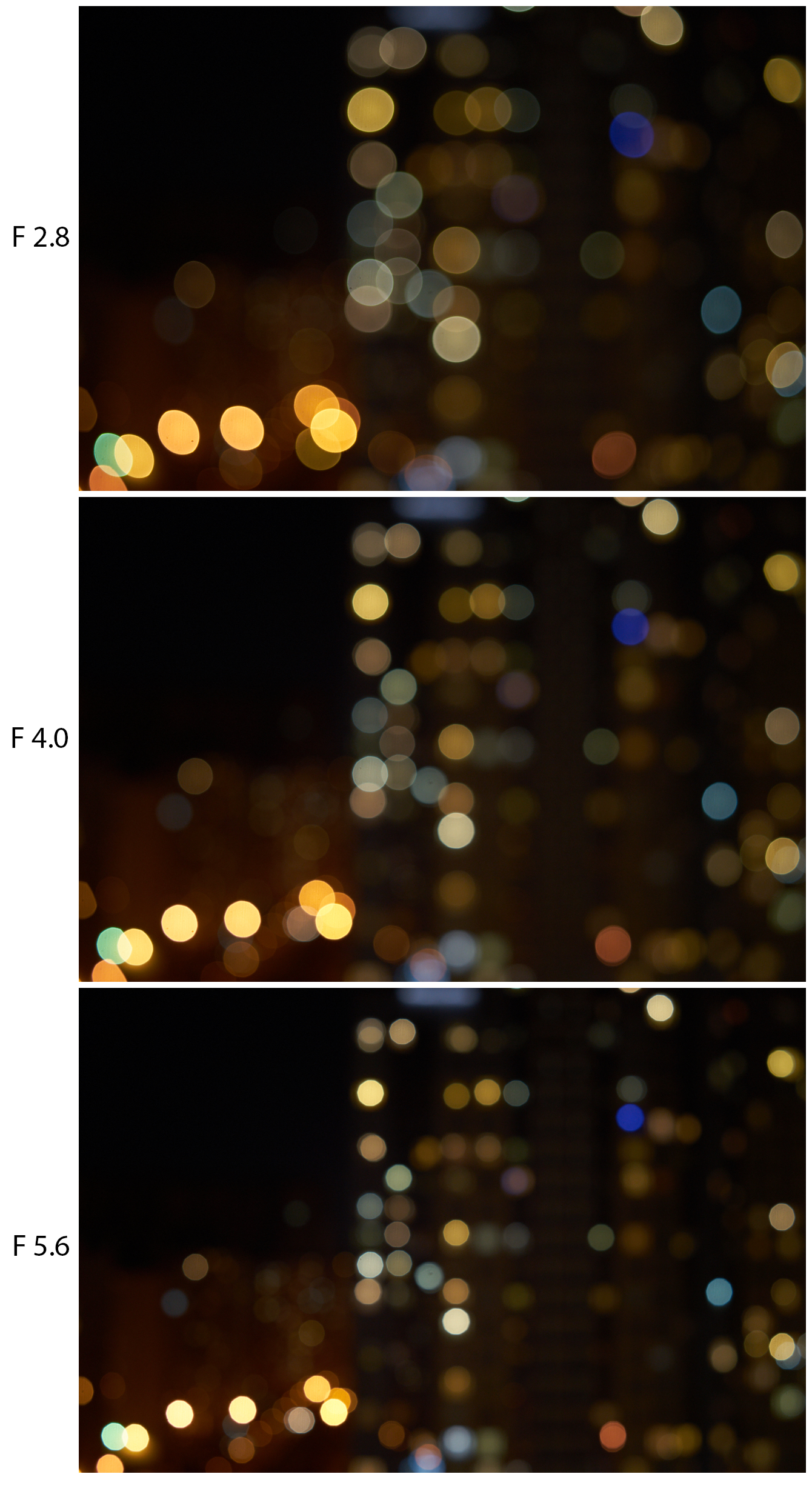 The lens is on the middle of the focusing scale – 3m, lights are on infinity (cityscape) 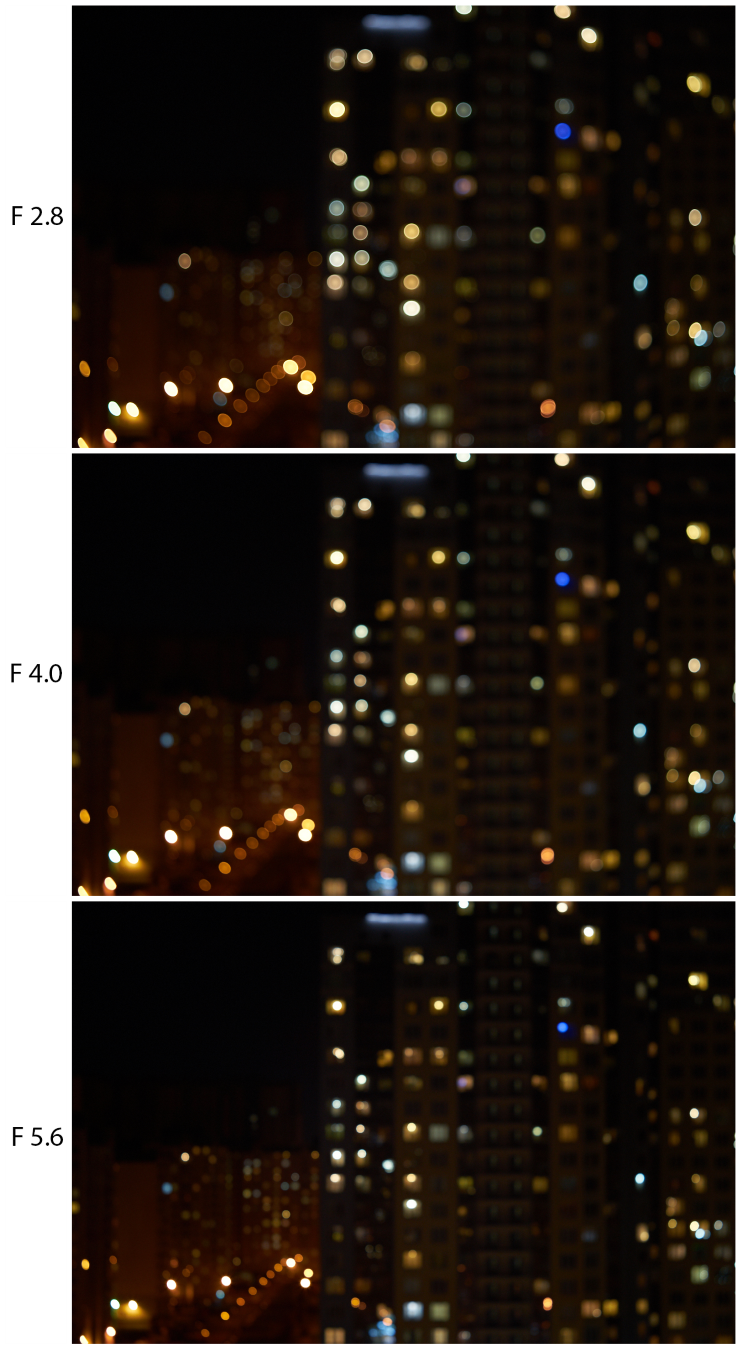 Other resources with reviews:

Just another one portrait-monster, but this lens is specific enough and can recommend mostly for those who are feeling that got photographers skill is enough. Chiyoko 85/2.8 is very cool, very powerful, can do impossible things, but very independent, cold, and not easy in establishing relationships.

Of course, so old lens has no chances against modern optics in comparisons by IQ, but the weakness of sharpness in corners can be compensated by feelings of spectators who are seeing photos rendered by this steel beauty. Real old-school style bokeh with a lot of aberrations which are providing amazing 3D effect, and with enough resolution at the middle and center points of the frame – all these makes lens an ideal for object-photos or portraits.

Be careful: the lens is heavyweight, aperture ring is mounted on the focus ring and spins together with it, there are leaks of contrast, it isn’t good in front-light conditions, 1,4m minimal distance, etc. – Chiyoko has more ‘cons’ than ‘pros’, that’s why I can’t recommend it to everyone, because at least basic skill in photography is required – ‘point and shoot’ approach doesn’t pass, but if the photographer got an idea how to use this lens – then it definitely will help to make a lot of masterpieces.

You did start tracking aperture blades, thank you :~)

What an interesting lens, definitely has a particular look. The corner softness in your portrait length test looks quite nice for some reason.