Here is an review of the lens, which is a legend not only of the company, but in general of the entire photographic industry. This is one of the vast number of examples from the beginning of the Japanese Economic Miracle. No matter what results it shows in tests, its value is historical: it is the world’s first mass-produced multi-coated lens.

The lens first appeared in May 1956, except for the prototypes of course. Was built by Tessar formula – 4 elements in 3 groups, very popular scheme at that time.

It has two versions – with 8 and with 6 aperture blades. The first version had serial numbers like 11xxxxx, the second version – 12xxxxx. According to calculations by Andrea Aprà (greetings and huge thanks to Andrea! This article contains a lot of his data), the number of released lenses for the first version is 1700 pieces, for the second – 4000 pieces. The amount is quite approximate, but the rarity of this lens for today looks like a good confirmation of the small number of existing copies.

As mentioned at the beginning of the article, this is indeed the world’s first lens with an achromatic multilayer coating – just a two layers but it was a real revolution. To my surprise, the Wikipedia has brief but good compiled information on the history of achromatic coatings in relation to the Minolta company. So let me just quote the desired text without modification:

Minolta (as Chiyoda Kōgaku Seikō) produced the world’s first multicoated consumer photographic lens in 1956 for their ‘Minolta 35 Model II’ rangefinder camera – the Rokkor 3.5cm f/3.5 – with their patented Achromatic Coating. New lenses for the 1958 Minolta 35 Model IIB, also used the Achromatic coating, including the Super Rokkor 5cm f/1.8 and 3.5cm f/1.8. All other lens surfaces of the 5cm f/1.8 were single-coated with at least the front-group being multicoated. Although the 3.5cm f/3.5 lens did not sell well due to the slow aperture, a more modern, multicoated Super Rokkor 3.5cm f/1.8 was later produced for the 35 IIB shortly before the system was discontinued, and therefore the lens is extremely rare today.

A prototype mutlicoated 5cm f/1.4 lens was also produced for the discontinued Minolta Sky M-mount rangefinder during its development, though it is not known if the coating was more advanced than that applied to prior lenses. By 1958, single-layer anti-reflection coatings were commonplace on photographic lenses around the world but it was not until 1966 with the introduction of MC (‘Meter-Coupled’) lenses that all Minolta focal lengths were updated to be fully multicoated, where every optical surface was coated at least twice, with the exposed front surface coating being relatively more scratch-resistant. Prior to this, full multicoating was mainly only applied to the standard 55\58mm AR (‘Auto-Rokkor’) series SLR lenses, between 1958 and 1965. These lenses would be collectively referenced by Minolta as the ‘green Rokkor lens’ in a 1962 16mm company film promotion titled This is Minolta, because of the predominant green reflection of the front-surface coating which was distinctive to the coatings of other companies. Their Achromatic Coating initially consisted of a two-layer thickness-varying vapour deposit of Magnesium-Fluoride but no ‘hard’ coating, meaning many examples of the lens today show scarred surfaces due to improper cleaning.

After 1958 when Minolta ended development of interchangeable-lens rangefinder products and focused on interchangeable SLR cameras and lenses, their Achromatic coating was continually updated throughout production with major coating advances being seen in 1966 (MC), 1973 (MC-X), and finally through 1977 to 1984 (MD-I, II, III). Hard-coatings were initially used in the immediate SR SLR series lenses. MC corresponds to the application of achromatic layers on all lens surfaces with new ‘ingredients’ (‘Double Achromatic’), while MC-X introduced even more layers of new ‘ingredients’ (‘Super Achromatic Coating’) similar to Pentax’s SMC, achieving an empirical improvement of about 1 stop with regards to flare and contrast control of dominating light sources.

Beginning with the MD series lenses, additional layers were introduced as standard, although it is clear that for all lenses in any series, improvements in coatings were gradually introduced into production lenses as they were developed. One of the primary marketing claims of Minolta’s Achromatic coating was that colour consistency was achieved across all lenses, deprecating the requirement for colour correction filters (common in the 1920s to 1930s) when shooting under constant lighting conditions with different lenses, although the claim has not been substantiated and any colour-consistency difference over competing brands is not clear. It is also not clear if Minolta intended the process name as a reference to achromatic (‘neutral’) colour (white, grey and black) – or achromatism (a lack of red/blue chromatic aberration).

If you need more details than start to research from the sources mentioned in the wiki:

Please don’t accuse me of copy-pasting the wiki. But this quote and list of sources is really worth your attention regarding this Chiyoko.

By the way, this is that legendary green tint: 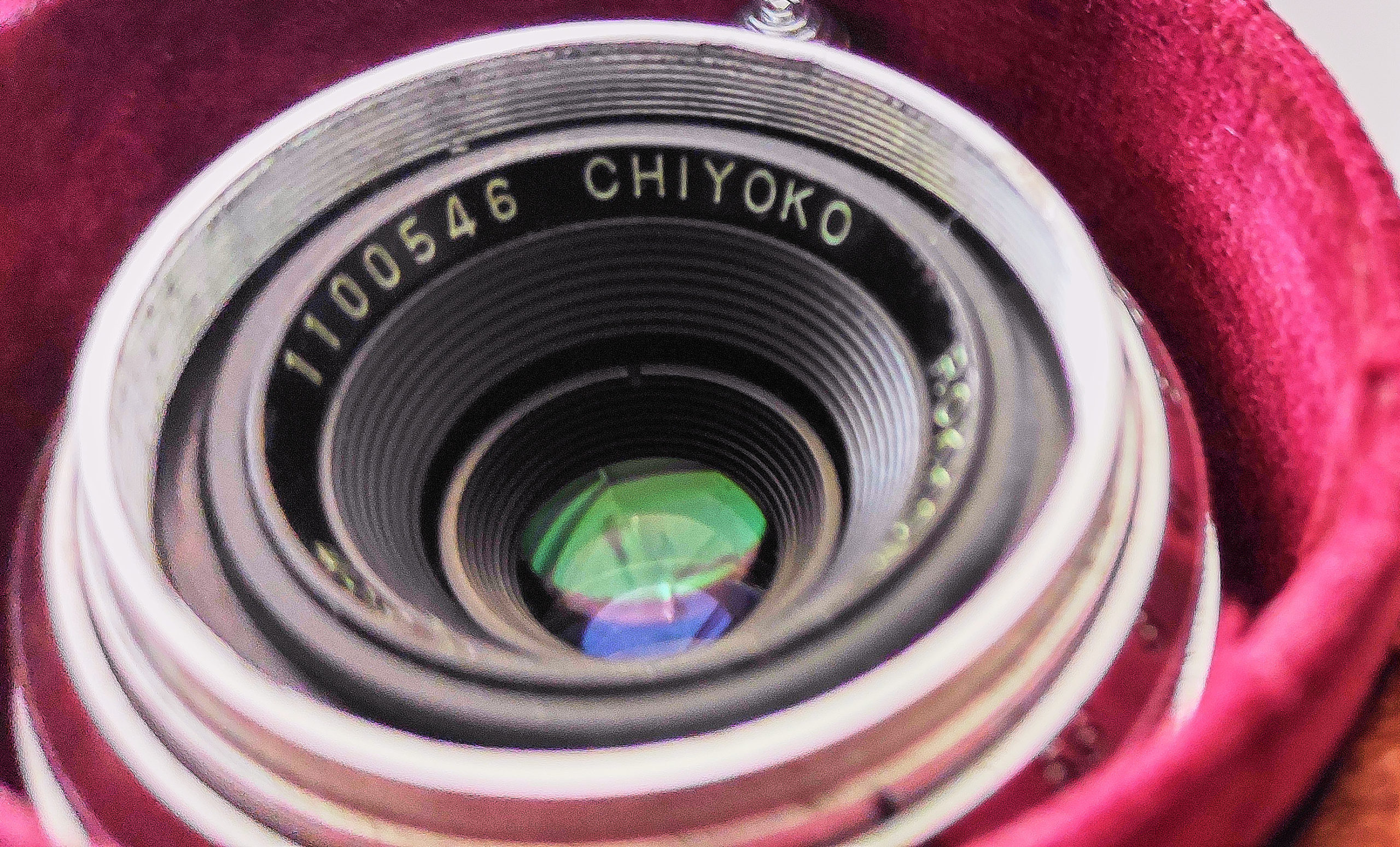 To my regret I was not be able to catch an original viewfinder for this lens (I spotted one but price was abnormal), so let me use a pictures made by Andrea Aprà, also with his information (adopted to the article):

The 35mm finder is a rare and very expensive item (for today). Even rarer is to find it in the original packaging.
Due to the fact that the 35 mm f/3.5 was sold without a finder and the photographer who wanted to see well what he was framing, necessarily had to buy it separately, it made this finder rarer than those for the tele that were sold with the enclosed finder. Not everyone needed it and only a few bought it. (For me it looks a bit like the case with lens shades for some 50mm MD III lenses, which are much rarer than lens shades for 28mm lenses which was included into sets.)

As with all lenses for the Minolta 35 there are two versions of this finder: with meters and with feet, obviously to be combined with the 35mm f/3.5 in meters or feet.

Additionally, there were differences in the parallax correction mechanism – in the construction of shoes. They have probably made some changes over time, we don’t know which one comes first and which one comes after.
So ultimately there are 4 different finders even if the main difference remains between meters and feet there is also a minor difference in the shoe mechanics.

while the 35mm f/3.5 arrives in 1956 and therefore has a different and perhaps more modern style from the previous ones that have kept the original style until the end.

Some elements of the set

The box and the back cap (It is not my set, somewhere from internet): 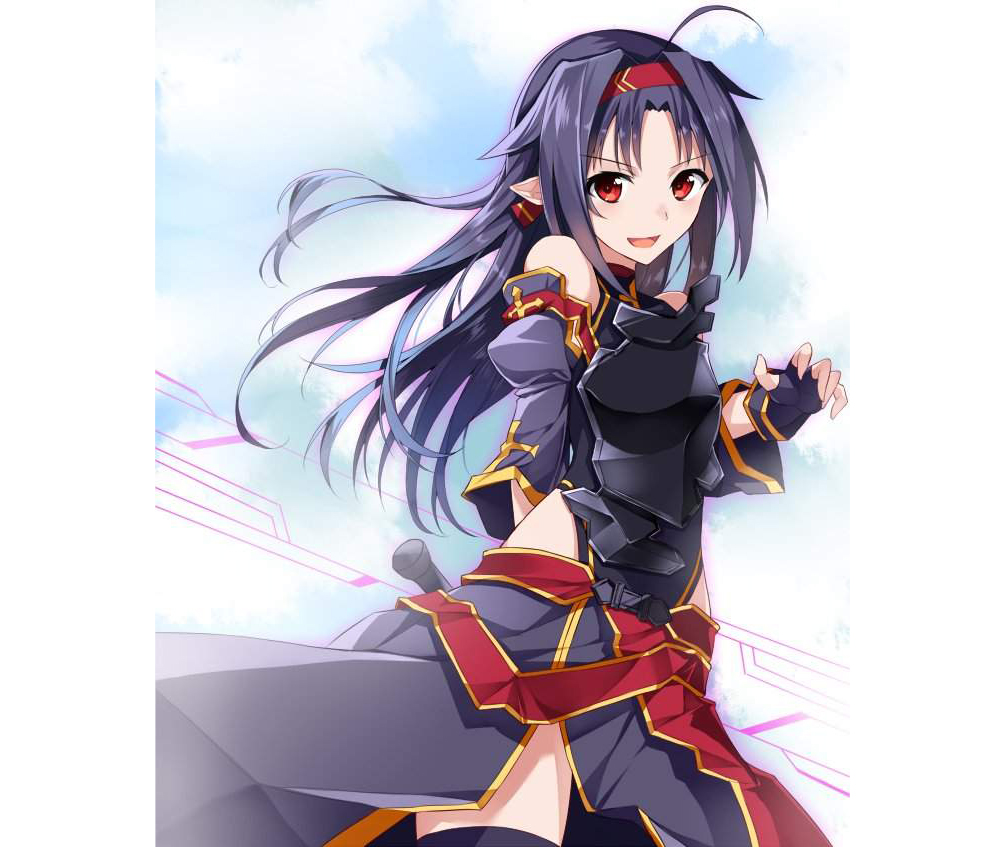 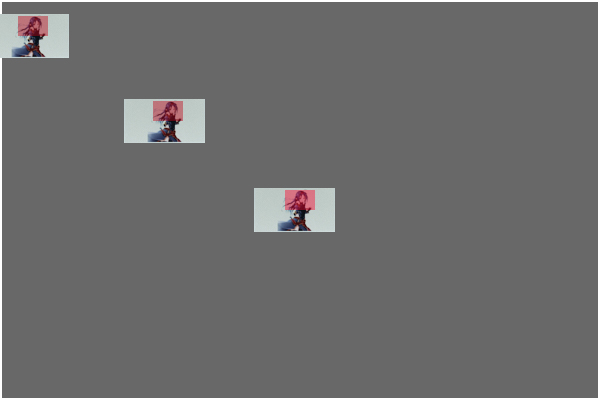 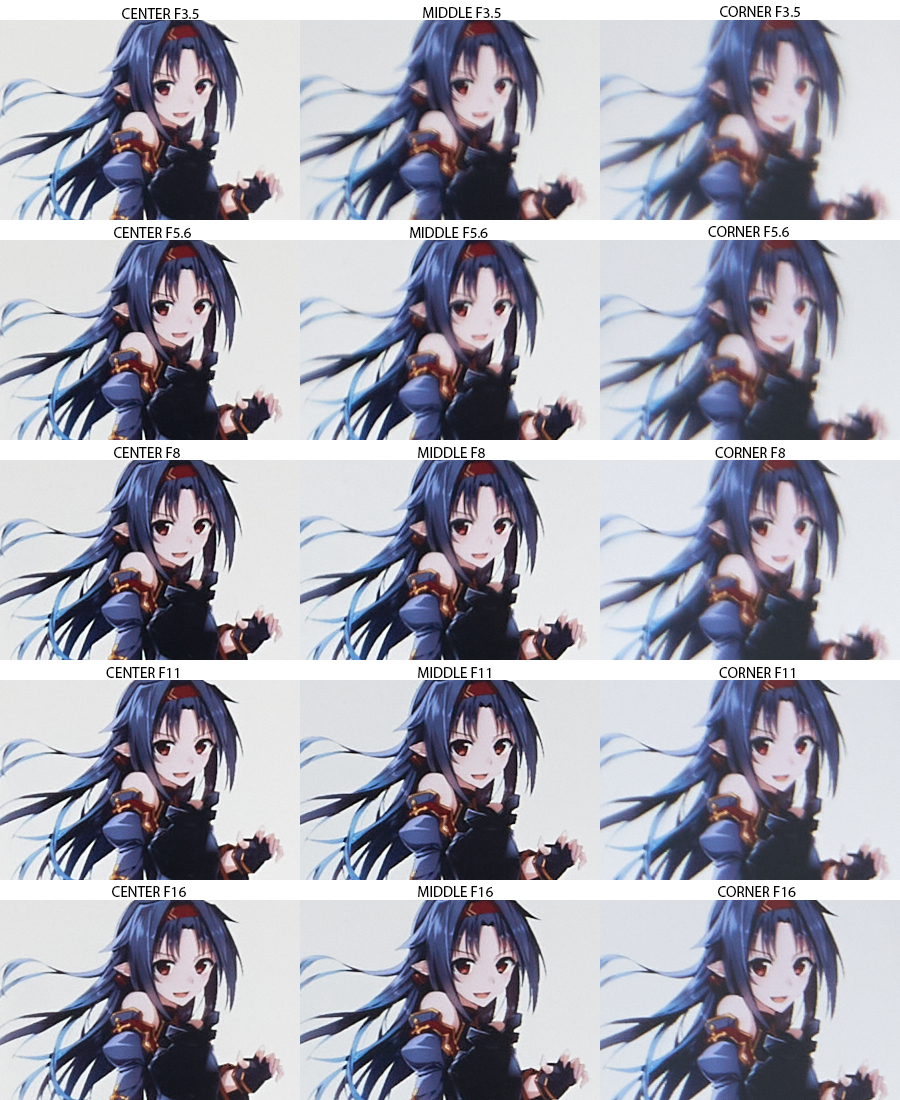 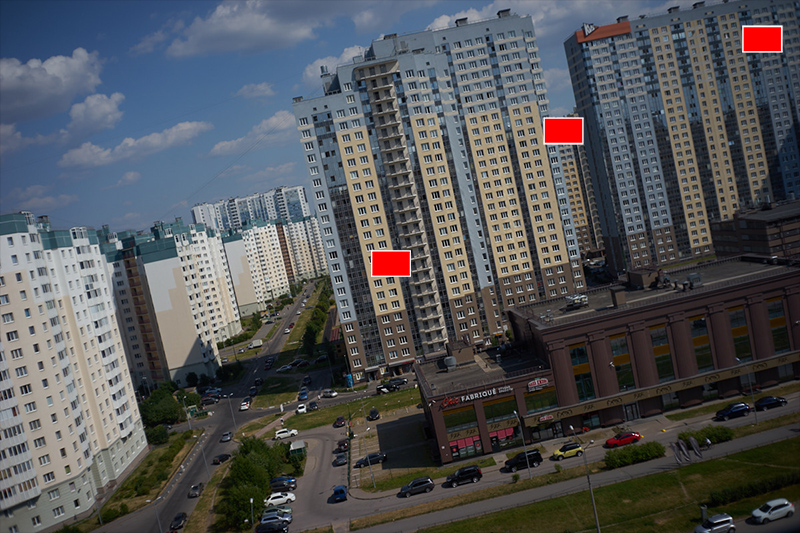 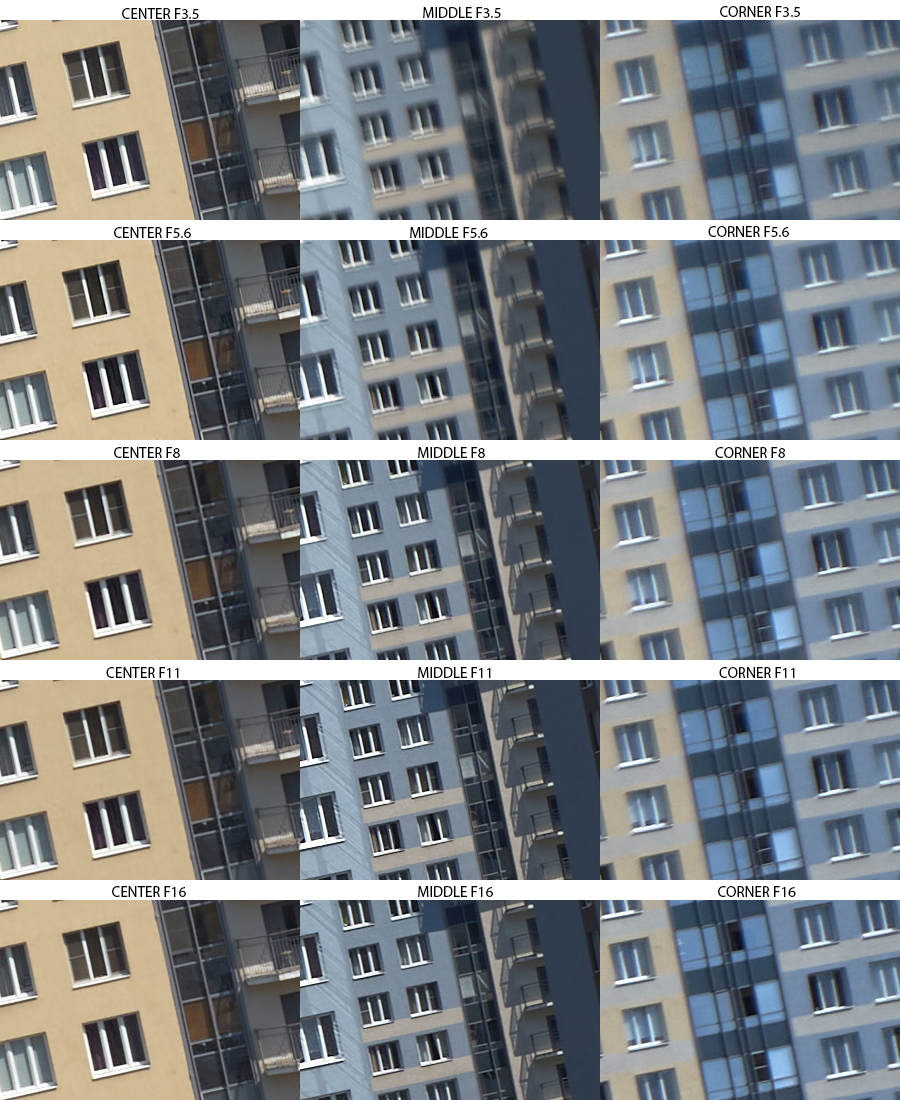 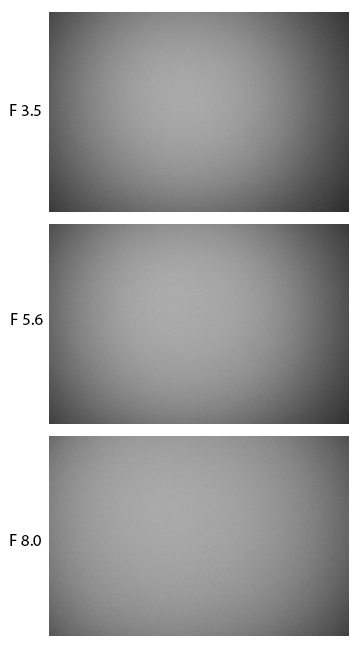 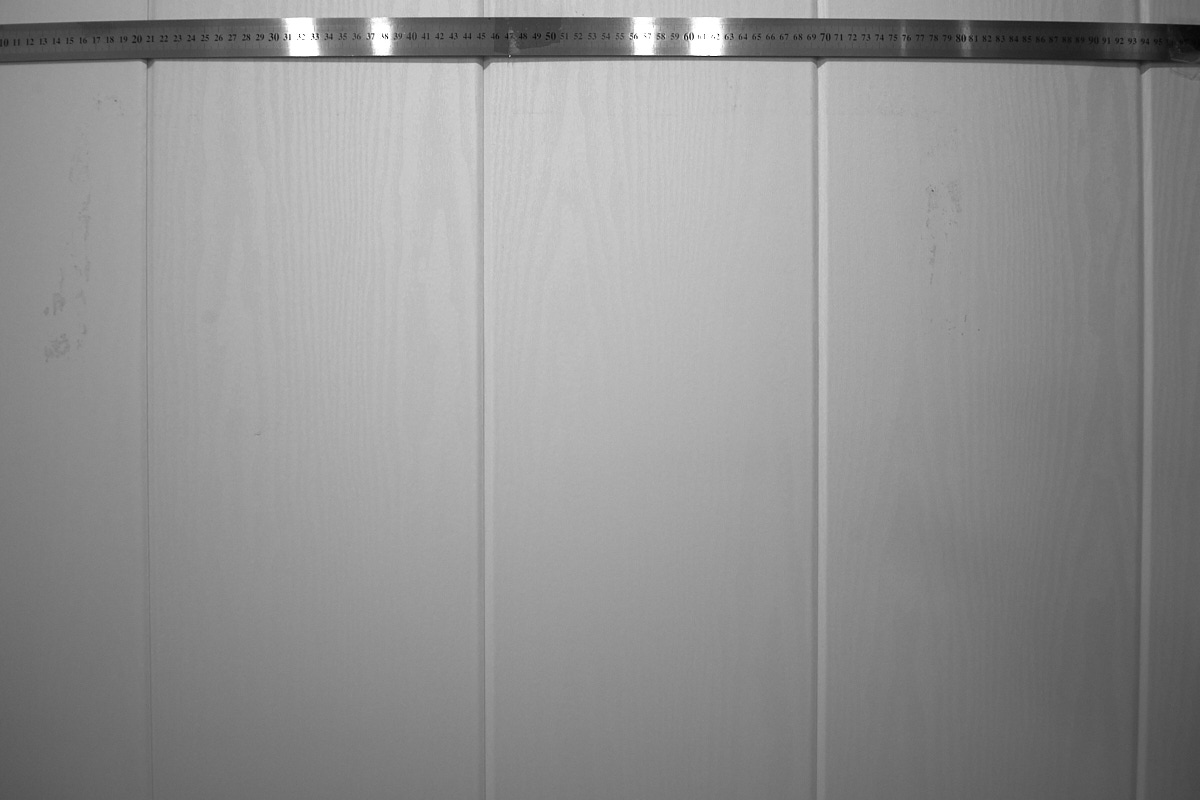 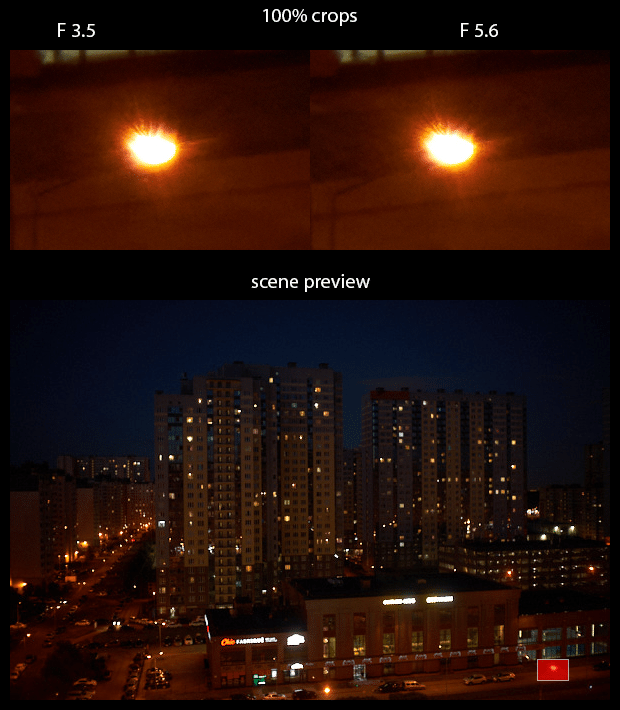 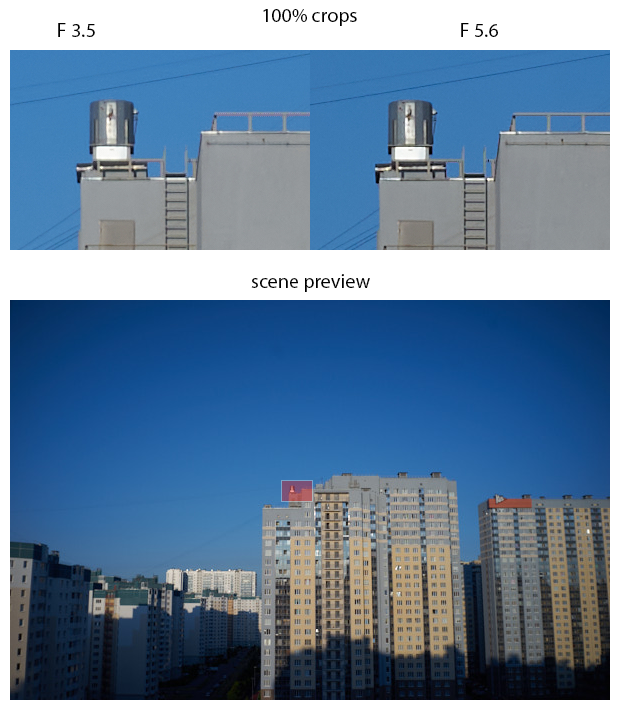 Test conditions: the lens was focused on minimal distance on the scale (1m), buildings are on “infinity”-distance. 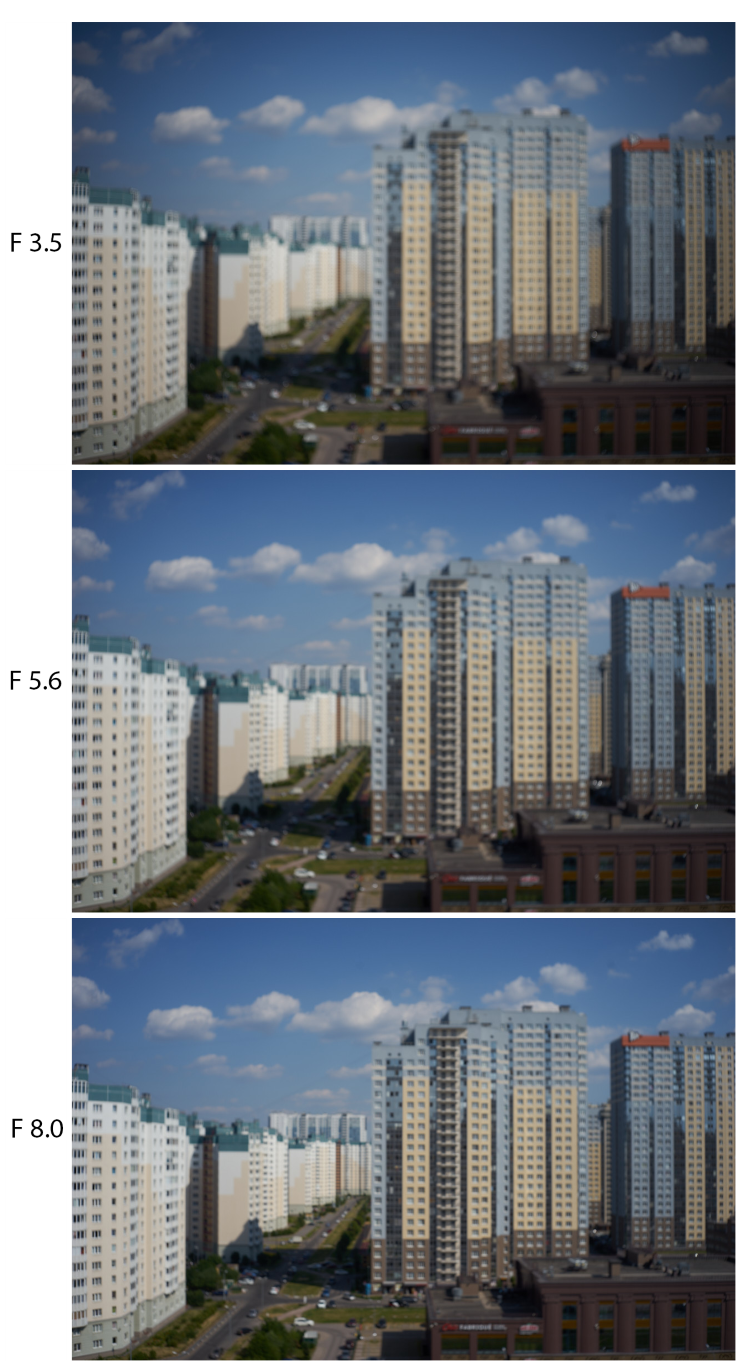 The lens is on the minimal focusing distance 1m, lights are on the “infinity” 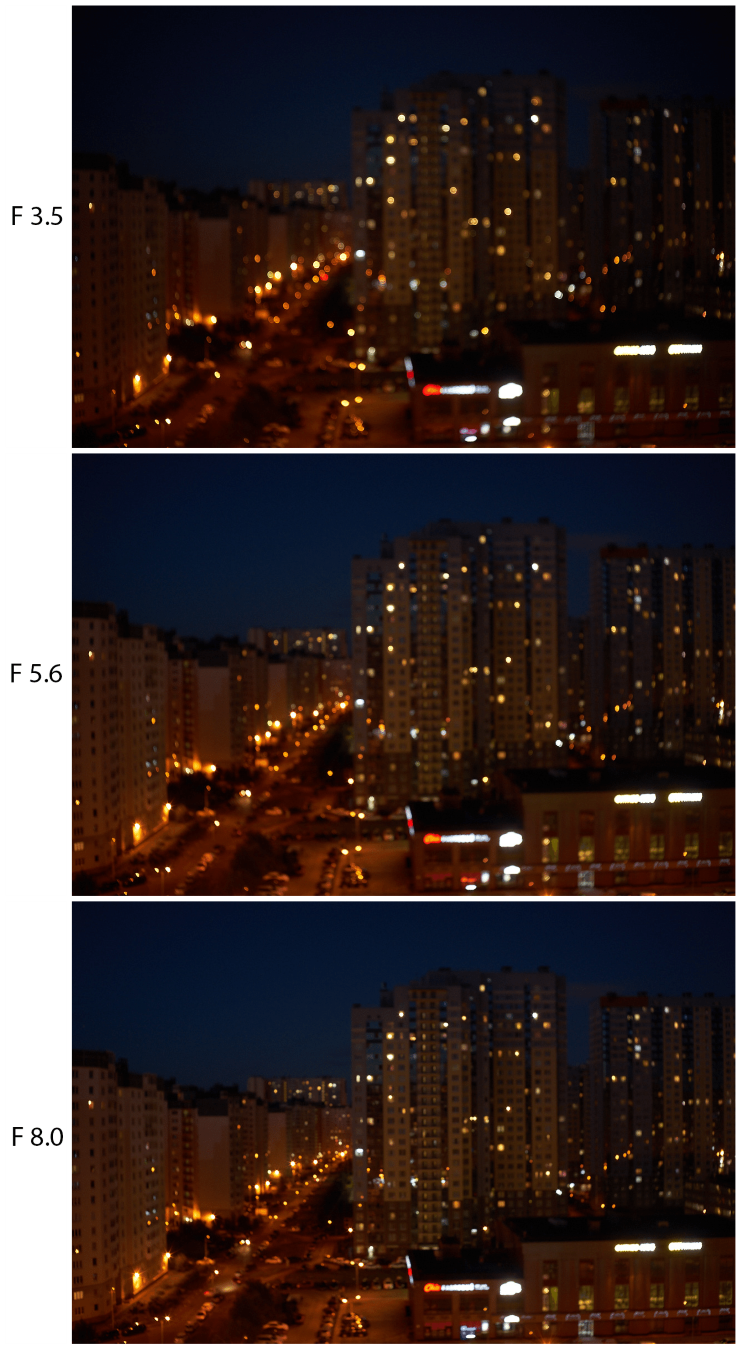 Let me to start with some bad news for photographers. The lens shows rather mediocre results in tests. Sharpness in the corners absences at any aperture. Vignetting is very noticeable. Big enough geometric aberrations – “barrel” type. As for bokeh, with such a focal length and aperture, it does not make much sense. In general, nothing interesting. The photographer is unlikely to be interested in this lens – because only coma is acceptable among all tests.

Although, such results make the lens a little unusual. Seriously, lenses without positive qualities are a rarity. Try to find a lens with a vignetting at f8 – it is not an easy task. (I had to write at least something positive about this lens, right?)

In fact, everything looks so pessimistic only in comparison with more modern lenses. This Chiyoko is a typical representative of the rangefinder technology of that era. There are several more tests on the site with early Minolta’s Super Rokkors and Canon’s Serenars – all of them show rather low results for today. Anyway, this lens is quite usable and can be interesting for art-experiments.

But if we talk about collectors… This is a bomb, of course.

Today it is very difficult to catch it for a reasonable price. Even for unreasonable prices I have seen them literally two or three times in the last few years. The reasons are clear: it is interesting for everyone who collects photographic equipment of any company, not just Minolta. Add here the fact that not a lot were produced.

So, this is the lens that has mostly historical and collectible values. I cannot recommend it for purchase to everyone simply because those who are interested in such optics know whether they need it or not even without my recommendations. On the other hand, if you are not a collector, but just accidentally stumbled upon a copy and its price does not look “surprising” for you – grab it, then you can brag to your friends at parties with a rare museum piece.